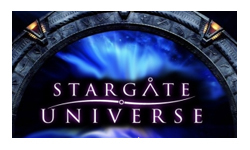 I was initially quite troubled with the direction of Stargate Universe, I felt that it was trying too hard to be all things to all people, and risked disappointing everyone. It was trying to find a way to be the more gritty, complex type of science fiction that everyone seems to expect in a post-Battlestar, post-Lost world. But the Stargate franchise had been successful for fifteen years following more brightly coloured themes of adventure and families of characters. At the end of Stargate Universe’s first season, I am happy say that they seem to have found a successful balance. While Universe certainly features more conflict and darkness than its older siblings, there’s still an obvious family resemblance in the mythology, themes and storytelling.

The frequent crossovers of technology and characters (helped along by the extremely clever plot device of the communications stones) are the most prominent display of the Stargate genes, but the structuring of the episodes also shows some familiar traits. Most episodes have a combination of some off-ship mission and on-ship character driven issues. The difference from previous Stargates is that the missions are often the smaller, more forgettable part of the story. There was a clever one involving time that I remember being impressed with and the two-part episodes all had some nice construction, but they’re mostly pretty forgettable. Mind you, they’re still more variable than the SG1 trick of visiting the same village set each week, just with different props, costumes and weather.

Meanwhile though there’s plenty going on back onboard to fill up the majority of the time. The collection of characters are fascinating, both individually and in the relationships and tensions that are set up amongst them. I’ve had more than one heated debate about the psychology and sociology of the crew as they come to terms with where they are, how they’re going to survive and how they’re going to live together. It is interesting that they are not just rehashing the ‘military vs science/civilian’ debate, but adding an additional layer that has never really been dealt with in Stargate before – what happens when the people you have, while not incompetent by a long way, would hardly be considered the elite. It seems to me that the original mission was probably never thought likely to succeed, meaning it was a bit of a dumping ground for scientists, administrators and military who have a whole variety of issues with anger management, communication, traumatic pasts and ill-advised romances.

It does make me despair a little that in this situation, people aren’t a little more supporting and constructive. There’s quite a bit of antagonising and posturing centred around the leaders of the three factions – Dr Rush, Camille Wray and Colonel Young. Dr Rush is an interesting but troublesome character, he’s like the dark version of Dr McKay – obnoxious, arrogant and extremely smart – but also manipulative and self-serving. His attitude usually pushed me towards siding with Colonel Young, despite that character’s own hot headedness and frequent demonstrations of poor judgement – at least he was genuinely thinking of the good of the group. I guess it could be said that Rush’s self-centerdness was for the good of the group too – he is the smartest person on-board, without him everyone would be at risk – but his unwillingness to even consult with the others frequently made situations worse before making them better. The third part of the equation is Camille, the civilian administrator/HR person who I felt was utterly useless, escalating tensions rather than soothing them as one would assume it was her job to do.

These three spend so much time trying to score points and leverage power that they just make all the situations worse, staging a coup is fine in a pissing contest for a week, but you’re gonna have to live with these people for years, there’s no point making communal breakfast uncomfortable. Meanwhile the junior members of the team – Lieutenant Scott, TJ the medic, Eli and to a lesser extent, Chloe all have a much stronger sense of “why don’t we all just try to get along”, acting as bridges between the different factions. But sadly while I found it satisfying that they often gave voice to what I was thinking, they often got ignored and over-ruled. They’re generally just left with the task of cleaning up after the grown-ups have made a mess, with only the faint satisfaction of getting to mutter “I told you so”.

As a whole, I enjoyed the season and found it extremely interesting, if occasionally frustrating due to characters making poor choices. It established itself well as it’s own entity – still a part of the Stargate franchise, but Stargate for the 2010s. It’s nowhere near as bleak and hard going as Battlestar, but it has risen to the challenge of being more than the somewhat disposable fun of Atlantis.

They do need to be careful to keep things moving forward in the second season, having the group start to come together, not to a perfect happy family, but acknowledging that they’ve got to start planning for the long haul. The first season has put down some good foundations, but things need to gradually build up from there, I’ll be very frustrated if this time next year I’m still writing about the endless bickering between the characters.