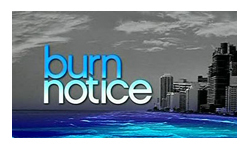 This is a show that’s been bubbling around at the edge of my interest for a few years (season 4 has just started in the US). It’s a relatively straightforward spy/action/drama/comedy type thingy, probably best described as a cross between Oceans 11 and MacGyver. It’s a show that gets very little press, but what press it does get mostly comprises of “this show should get more press”. It turned up on Bravo or some such channel recently so I decided to give it a shot.

The show airs on the USA network, which has itself a nice line in amiable shows with entertaining plots, well written dialogue and interesting characters; features that are only really remarkable because so few series actually manage all three at the same time consistently. Shows like Psych, White Collar and Monk, things that I’ll tend to pick up when I see the dvds massively reduced, or am desperately hunting for something to watch in the background while doing a monotonous task. It’s comforting that these shows are about, you know exactly what you’re going to get and know you won’t be disappointed.

Burn Notice falls happily into the same pattern, I trundled through the twelve episodes of the first season perfectly contentedly, paying attention to the action bits, chuckling at the dialogue and mildly curious about the season long mystery. Like cosy, somewhat sarcastic, occasionally explosive slippers. I like the little directorial tweaks with zooms and rewinds, the voice-over has a wonderfully weary lecturing tone and it has Bruce Campbell in it.

My criticisms would be relatively petty ones. I don’t like the setting in Miami, given that I don’t even watch CSI:Miami I don’t know why I find it such a boring choice, but I do, maybe it’s just the fact that I don’t like hot weather and beaches that sets me against the place. The character of Fiona is great – an ex-IRA weapons expert with a great sense of humour and violent tendencies that constantly irritate her companions… but even though Gabrielle Anwar quickly switched to an American accent, I can still hear the lingering awful Irish accent that she tried in the pilot. The character of our Spy’s mother I have less interest, generally she was shrieky and irritating and I hated every moment she was on the screen.

All in all, a fun series that I wouldn’t suggest going out of your way for, but would recommend if it happens to pass by, or you’re a massive Bruce Campbell fan.