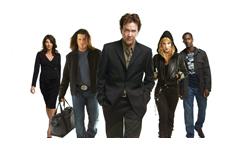 A slightly disappointing second season for the American Hustle, although that slight disappointment says more about the extremely high standards the first season set than it does about the solid but unspectacularness of the second.

On the plus side, Sophie was missing from most of the season, appearing only via webcam to annoy me. I’ve never liked her character as much as the others, but it wasn’t until she was absent and replaced that I realised how irritating she was. Like everyone else on the team, she’s very good at what she does, but unlike everyone else she doesn’t just get on with it, she makes a fuss and whines and flaps. Her little paddy at the start of the season about “knowing who she really is” was extraordinarily irritating and I was happy to see her and the weird relationship she has with Nate fall into the background for a while.

The team without her worked perfectly nicely, Jeri Ryan (of Seven-of-Nine fame) made a nice addition to the cast to take over Sophie’s grifting role and the way she bonded (or not) with the team was entertaining to watch. All the relationships between the team members are still fun, although another irritation of the season was the lack of character development that was slowly revealed in the first season. The return of some familiar faces was very welcome, the always wonderful Mark Sheppard stealing scenes as per usual.

I enjoy the show – it’s never dull, the dialogue is snappy and the characters unique. Many of the episodes are pretty forgettable, but even those are entertaining for the 45 minutes they’re on. A few of the episodes really stand out, whether for a clever plot twist, or more often some great guest stars (Luke Perry, Wil Wheaton, Richard Kind). At 15 episodes long the season burns through surprisingly quickly and left me wanting more.

is available from Amazon for 18 quid,
season 2 is currently showing on Bravo and season 3 recently finished in the US.

One thought on “Leverage: Season 2”