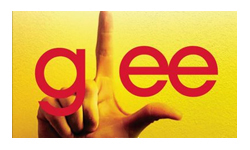 I cannot write this review without addressing the fact that I am currently obsessed with Glee. I watch episodes multiple times, the soundtracks are the only music I have on my phone and if not for the fact that I can’t find anyone willing/able to go with me, I’d be off to the live show this weekend to squeal away with the rest of the obsessed gleeks.

I am however not so naive that I don’t see that I’ve been manipulated into that obsession by a manufactured pop show which has very little to do with quality and instead has everything to do with creating something that drags you along regardless.

Every week, I find the perfect moment to settle in to watch Glee, when I’m in the right mood to switch off the higher parts of my brain and just immerse myself in the bright colours, cheery songs and over the top story lines. When I do that, I adore the show and what it’s trying to say, despite its massive manufactured success, at its heart this is a show that’s screaming out relentlessly positive messages. It doesn’t matter the crap that is thrown at the characters, or that they create for themselves they come together, through music and friendship (and sarcasm). The songs that they sing become anthems about expressing yourself, being who you are, not being afraid to be different. they make me feel better about the world somehow.

While I adore the show, I don’t see any reason why it can’t be better. It’s improved in consistency since the first season, but there are still leaps and bounds to go. There are only two writers and it shows that they clearly have characters and stories that they find easier to write. Kurt’s storyline was wonderfully told this season and it’s immensely satisfying to see the development of the character from the irritating caricature of the first season to a comfortable and confident grown up by the end of the second. Santana may not have reached the ‘end’ of her character development yet, but she also had a fantastic progression from a one-line bitch to someone who’s working out who she is and how she fits in.

In comparison a lot of the characters however continue to suffer from the erratic or completely absent development of the first season. While Kurt, Santana and even Brittany were clearly growing up, other characters were just staying still. The love triangle between Finn, Quinn and Rachel was tedious, I continually lost track of who was with who and didn’t really care because the characters were all so flat anyway – Finn continues to bumble along failing to do anything remarkable, Quinn reverts to being a snooty bitch, Rachel continues to be a diva. Meanwhile Puck develops a weird obsession with the awful Lauren and Tina, Mercedes, Arty and Mike don’t seem to do much at all.

As for the grown-ups, I really do wonder what on earth they’re doing. Will and Emma make terrible decisions all season long, with that kind of example it’s no real wonder the kids are struggling. As for Sue… she’s still all over the place. One minute wanting to shoot cheerleaders out of cannons regardless of the mortal danger, the next actually being the only teacher to react constructively and honestly to bullying, then she tries to marry herself, and then she’s heartbroken at the death of her sister. The fact that this flip-flopping isn’t completely ridiculous is solely down to the fact that Jane Lynch is incredible.

I’ve now managed to depress myself by thinking about all the ways Glee kind of sucks. Which is fundamentally why I don’t think about Glee that hard. You really have to watch it with your heart, not your head. I love Glee because it makes me happy. I can pop the soundtrack on and walk along with a grin on my face and a swing in my step. While watching an episode I often have to restrain myself from clapping and squealing like a child. Season 2 was better than season 1, and for season 3 they’ve hired a load of new, experienced writers and pledged respond to the criticisms that have been made. If they take the foundations they’ve got, and fix the simple things they’ve been getting wrong, I am quietly hopeful that they may be able to make season 3 something absolutely superb. If they can’t, it won’t matter to me, because I’ve got Born This Way playing loud in the background and I have a massive grin on my face.

One thought on “Glee: Season 2”