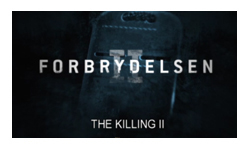 While I was late coming to The Killing, only embracing it over the summer reruns, I was right there for the second season, eager to tune in on time so I could keep up with the gossip in the office and on the blogs.

The second series is different in both structure and substance from the first. The shorter ten episode season worked well I thought, with the BBC airing two episodes per week it had a similar level of intensity as I experienced watching the first series one episode per night. The shorter season also meant less padding and red herrings, which was fine while you were watching season 1 but at the end of it you realised you’d been mucked about quite a lot.

A shorter season wasn’t the only change and unfortunately I didn’t like the other big change so much. The first season had a very interesting scale to it, at its heart the case was ‘just’ the death of a school girl, the impacts of which were devastating to those close to her, but of very little concern to the wider world. But as the series went on the scope of the case fluctuated as connections to local politicians and scandals waxed and waned. I enjoyed how these were twisted together, with the police stuck in the middle of it all trying to do their jobs while family and politicians all wanted to keep secrets, push things away or pressure for answers.

That complexity was missing from the second season however, with the mystery of a much larger scale from the very beginning. I felt this season was much more about unravelling a political conspiracy than it was about finding out who killed the victims. There’s almost nothing from the families of the victims, instead the investigations are focussed on senior military officials and politicians, by the time they were suggesting that the Prime Minister was involved and flying off to Afghanistan to question people I’d rather forgotten about the fact that people were dead.

On the positive side the mystery itself was well constructed and well paced for the shorter season. There were sufficient red herrings and dead ends to work through to give a sense of steady progression and enough cliff hangers to keep you coming back. Lund continues to develop into a really fascinating character too. She’s far from a superhero – she’s a good detective (certainly better than her colleagues who are resoundingly rubbish) but her investigative skills are balanced by a complete lack of social skills that limits her capabilities. She was pretty insular last season, but those experiences and her time exiled to grunt work have exacerbated many of her less functional traits. The way she struggles to engage with colleagues, witnesses, suspects and family alike is brilliantly played, managing to be interesting, painful and often hugely entertaining.

I may not have liked the storyline as much this season as I did the first, but I still think this is an extremely well put together and fascinating show. The writers and directors manage to create a blend of mystery, drama, humour and action that makes for an interesting and entertaining show that is entirely at home in the schedules next to the very finest the UK and US have to offer.

3 thoughts on “Forbrydelsen (The Killing): Season 2”