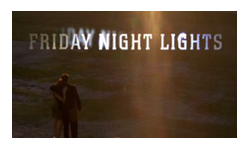 I spy that Sky Atlantic are about to start showing Friday Night Lights, and this is my begging grovelling desperate petition for you to give it a shot.

I used to just watch what happened to be on, whatever caught my eye in advert breaks, I might go an extra bit of effort to seek out the more illusive scifi shows, but for the most part I only watched what was available on the channels I had. Gradually though I started getting more interested in what critics told me I should be watching, which meant seeking stuff out on random channels, buying dvds or using more circuitous methods to obtain shows that didn’t make it to the UK at all.

Friday Night Lights is almost the epitome of that. In the US its lacklustre ratings led to it being taken off its original network, but it was saved in a unique deal that saw it premiering on a minor cable channel first. In the UK ITV4 showed one season at some ridiculous time and you can’t even get the rest of it on DVD. Despite it being hard to find though it is one of the most critically acclaimed shows of recent history.

The primary reason that people won’t want to watch Friday Night Lights is that it appears to be about American high school football. But if you let that put you off then you’re not watching television right, it’s not a matter of what the subject is, it’s a matter of what the show is really about. American football is the subject of Friday Night Lights, but really this is a show about people and relationships. It’s about kids who have dreams and kids who don’t, kids who are going places and kids who aren’t, it’s about the friends and families and teachers who will fight for every single one of those kids whether it’s their own son, or a random kid at the back of the class. The football games aren’t about kicking a ball through the posts, it’s about kids finding their confidence, a coach inspiring his athletes, a team supporting each other and an underdog overcoming expectations. It’s epic. But it’s just a small town in Texas.

Friday Night Lights and its cast has been in my ‘awards’ lists every year I’ve watched it. It’s on my shows of the decade list in second place. I can’t think of a single show that I’ve become so emotionally invested in, I had to take an extended break at one point just because I found out a spoiler that I didn’t want to see come true, not because it was a bad story or an illogical one, but because it made so much sense but broke my heart anyway. I cried my way through box loads of tissues over the years with almost equal measures of sorrow and joy.

My reviews: Television of the decade, seasons 1, 3, 4 and 5. I’m not alone! The Guardian has done not one but two pieces on why you should watch.