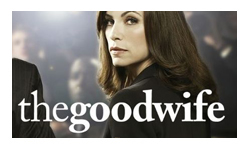 There isn’t much on network television these days that I would label as ‘superb’, that praise tends to be with-held for cable shows and frankly not very often even then. Shows on network channels in the US are always desperate to maximise the number of people watching, particularly in key demographics and for some reason that doesn’t generally seem to correlate with what I for one consider high quality. The Good Wife was ranked 26th in the ratings this year, while above it were shows like NCIS, NCIS LA, Criminal Minds, Blue Bloods, CSI and Castle. There’s nothing wrong with those shows, I watch and enjoy them all (well, maybe not so much NCIS but that’s another story) but fundamentally they play for entertainment not quality. The Good Wife really is in a different league, and I’m genuinely not sure whether to be depressed that quality only ranks at 26th, or pleased it is as high as that at all.

The Good Wife has got all the right ingredients, a talented and charismatic cast, interesting characters with a network of complex relationships and a good balance between gradually evolving long term story arcs and well thought out episodic plots. When I write it out like that it doesn’t sound like rocket science, but it’s amazing how few shows actually get it right.

The last point in particular is one that procedurals struggle with, too often the cases of the week (be they medical, criminal or legal) are instantly forgettable, or the arc storylines are unevenly developed with mad rushes of character issues generally prompted by unlikely disasters to engineer cliffhangers. The Good Wife manages to inter-weave the plots seamlessly, the way that normal people’s lives work combining the day job with big life choices.

The best thing for me however with this show is the cast. Everyone on the show from the regulars to the astonishing guest stars are veteran performers and their experience shines through. They have a lightness of touch that makes every scene and every line a joy, simple looks between characters or lines of dialogue are delivered so beautifully that they have me reaching for the remote to re-wind. Just in the last episode simple things like Will and Alicia leaning against the wall of the lift (echoing the end of the previous season), or Will’s response to bad news (“oops”) had me grinning because they were just so understated and well done.

I did have some criticisms of the second season, particularly the Kalinda storyline which just seemed a bit daft. Thankfully that was toned down a lot this season and she went back to being a mysterious and complex character, instead of a nut case. There were a few plot developments that maybe stretched credulity, but I mostly gave them a pass as it’s possible that lawyers and politicians (and even worse – the murky waters of the state’s attorney office that combines both) really are that mean and vicious. On the plus side those moments did bring in some of the best guest stars including Matthew Perry, Michael J. Fox and Martha Plimpton, three hugely likeable actors playing epically unpleasant characters. Jackie, the \Good Wife’s Mother-in-Law meanwhile is becoming a slightly pantomime character, she makes her son seem like a pushover compared to her ambitions.

I love this show. It’s funny – the characters may be big important lawyers, but they still have fun and stumble through normal problems like Diane’s awkward romantic endeavours, Eli dealing with a headstrong daughter or Will being harassed by his sisters. The moments of friendship are beautiful – Will and Diane dancing, Kalinda and Alicia gradually working their way back to sharing tequila and feel so grounded and well earned. I enjoy watching the show, I find the storylines interesting and challenging and genuinely care about the characters for all their flaws. I realise this review is a bit on the gushy side, but really amongst so much mediocre ‘okay-ness’ out there, The Good Wife is an absolute gem.