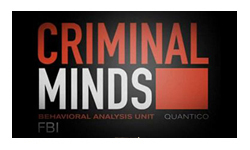 My resounding feeling at the end of the season was that it was… fine. The characters are now well established and generally pretty consistent. JJ was the only one that bucked the trend, she seems to have come back from her year with the Pentagon something of a super agent, not just now as good a profiler as everyone else, but also a bit of a kick ass action hero. Prentiss on the other hand came back from the grave pretty much unchanged which meant her sudden decision at the end of the season to leave the team again came a bit out of left field.

As per usual with Criminal Minds the attempts to do larger stories around the characters’ personal lives feel somewhat out of place. We’re introduced to Rossi’s ex-wife only to have her die of a terminal illness a couple of episodes later. It feels rather like cheating to introduce a never before seen character just to kill them off to see the effect on a central character. There was a similar problem with bringing JJ’s boyfriend in for the final episodes just so he could be held hostage and upset JJ. The more gradually introduced character of Hotch’s new girlfriend was handled a lot more smoothly and therefore had more long term impact.

The weekly cases were all variously bleak, depressing, gory, creepy and occasionally downright disturbing. I didn’t really remember any of them as particularly outstanding, and there didn’t seem to be as many high profile guest stars as previous seasons. I might have liked a little bit more in the way of long term storylines, but I did enjoy watching each episode so maybe I shouldn’t push my luck.

I genuinely can’t think of anything else to write about the season. Criminal Minds is an absolutely reliable series, always entertaining and interesting, but rarely particularly innovative. However compared to some of the other shows out there, reliable and competent is apparently more challenging than it may seem.