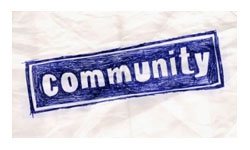 Way back in 2009, I hadn’t yet given up on watching pilots of comedy series, so did actually review the Community pilot and liked it. However despite the critics absolutely adoring it, I didn’t watch it, not least because it was buried on some obscure channels in the UK.

Jump forward three years and a couple of friends forced the first season dvd upon me and nagged until I watched it.

It’s the kind of show that could relatively easily be dismissed, but the more attention you pay, the more it rewards you with a lot of exquisitely crafted writing that takes a sideways look at everything and crafts spoofs of just about every subject under the sun.
The episodes which are built around referencing genres or specific films/shows are the high point of the series. Each one is entirely respectful, as if the writers genuinely love whatever they are pulling apart, poking fun without being mean or snide. The other clever thing is that you don’t necessarily need to be a fan of the target, or even know anything at all about it, because the story, characters and jokes are all well enough done that the show is still entertaining.

The show doesn’t always manage to hit the right balance for me, the characters walk a very fine line between being quirky and ridiculous. It’s often not really believable that Chevy Chase’s Pierce hasn’t been lynched by his fellow students, or that anyone tolerates Shirley’s simpering for more than one class. Mind you I can forgive most of those problems because while not all the characters work, the writers did introduce us to Abed, who sort of floats through the series like a media obsessed soothsayer. Rather than have the biggest geek be completely disassociated from reality, in many ways he’s actually the member of the group most in touch with the real world, quietly manipulating everything around him. He isn’t the star of the show, but he is the heart and soul of it.

With each episode lasting just 20 minutes or so once you strip out the adverts the episodes never outstay their welcome, each carefully constructed to build up towards a satisfying ending – be it a sweet one or a cynical one. It does exactly what a comedy should do, makes you laugh and realise how daft real life is.

Also – any show that generates a gag reel almost as long as an episode has to be worth a look.