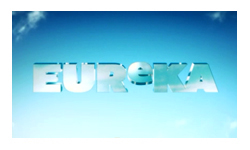 I actually think I watched this season years ago, but didn’t review it at the time. I do remember enjoying it, but I stopped watching at some point because my housemates preferred Warehouse 13 and watching both felt somewhat overkill. I recently stumbled across it again on Lovefilm instant and it turns out it’s perfect telly for baking or ironing too, which doesn’t sound like high praise, but fills a very important slot in my life.

It’s got a cute concept at its heart – what if the US government and military put all of its smartest (and most eccentric) people in one place? Eureka is a town populated by extremely bright people who cheerfully bumble about inventing stuff and creating chaos. Shepherding them along however are various bureaucrats, some well meaning and some more sinister, who manage and direct the chaos in an attempt to… well… that’s the question. Better living through better weapons? More progress through more profit? The pull between these factions is a constant source of secrecy, conspiracy, paranoia and even more chaos.

In the finest tradition of television, thrown into the mix is a normal bloke. His IQ is far from genius, he’s moderately hopeless with technology and he doesn’t know what he’s getting into. But, again in familiar television world, he has a strong sense of justice and a desire to see everyone blow themselves up as rarely as possible, and a way of seeing through the bullshit and the technobabble to solve problems with brute force simplicity. He’s also sarcastic, which instantly endears him to me.

The stories and plots fall into a regular pattern of gizmo of the week, working their way through various standard tropes such as the all powerful AI over-reacting to their programming, paradox inducing time travel, paranoia inducing satellites, escaped nanites creating replicants… all the usual stuff. But it’s not really the stories that are important, they’re just a way to get to spend more time with the characters. Everyone is pure fun to watch, each actor takes a standard character type (dumb sheriff, intellectual snob, whiny teenager, good natured professor, unabashed nerd) and gives them confidence and self-awareness, so they’re comfortable in their relationships with each other and fun to spend time with. Like many sci-fi channel shows the whole thing ends up being about teams and families much more than whatever the synopsis says.

Eureka doesn’t set the world alight, but it is Nice and it is Fun, which a surprising number of shows just fail to deliver. I’d frequently find myself pausing mid-brownie making and getting engrossed in an episode, because I didn’t want to miss the little lines of dialogue and bits of body language that just made the whole thing jump off the screen. I need more excuses to bake (or more ironing to do) so I can get straight to the second season.

Eureka is available on Lovefilm instant and dvd from amazon