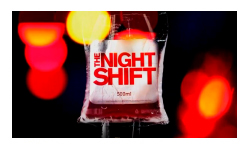 The Night Shift
The night shift in the Emergency Room at San Antonio Memorial is full of Characters, with a most definite capital C.
The show has some potential – reliable premise, solid characters and cast members who’ve been reliable (if not spectacular) in their supporting roles on other shows (Eoin Macken of Merlin, Freddy Rodriguez of Six Feet Under, Brendan Fehr of Roswell). But the pilot at least is very by-the-numbers and is painfully lacking in subtlety. They try to establish backgrounds and future stories for at least 8 characters and there’s not much room left for elegance. The stories, both medical and otherwise have been done to death in other shows with infinitely more accuracy and attention to detail and I was particularly bored by the conflict between the penny pinching administrator and the sanctimonious medics working around him, isn’t it time for a more nuanced discussion of this? The potential is good enough that I may give the other 7 episodes of the season a try as something to accompany cooking or tidying but that will be despite of, not because of, the pilot.
No UK broadcaster has announced they’ve purchased it, but it has been picked up for a second season by NBC in the US.

Intelligence
Dr Phlox from Enterprise has implanted a chip into Sawyer from Lost which turns him into a super-agent with Google, satellites and all sorts of ‘apps’ in his head. Catherine from CSI runs the agency and brings in Ruby from Once Upon a Time to try and keep Sawyer from either getting himself killed, or falling down the rabbit hole searching for his supposedly dead CIA wife.
The pilot ain’t bad. The magic chip idea is good but doesn’t seem to have been entirely nailed down as to what it can and cannot do, so there’s a great danger of it turning into a magic mcguffin that can solve all problems at just the most dramatic moment. The side story of investigating the death (or disappearance?) of Sawyer’s wife is a little tedious, but at least it means that there’s no immediate question of will-they-won’t-they between the new partners. I did like that they opted to not have the pilot be an origin story, but instead have a new member join the team as means to deliver all the exposition.
I think this was solid, but not remarkable. There wasn’t anything that made me want to see the next episode. Despite Holloway’s obvious charm it was a bit superficial, lacking in emotional connection.
Sky 1 broadcast Intelligence earlier in the year, but it’s been cancelled by CBS after finishing its 13 episode first season. Presumably it just didn’t generate the massive ratings that CBS requires from its prime time dramas.

Chicago PD
A spin off from Chicago Fire. Detective Voight is to all appearances a dirty cop, violent and on the take. But there seems to be something else going on as he’s been given a free pass and is now heading up his own team.
Just like Chicago Fire, this is a show that knows exactly what it is and delivers it very effectively. The pilot is very well put together and introduces each of the characters pretty slickly giving each a moment to show they’re distinct and have depth, but not overloading the audience with exposition or heavy handed hints. Occasionally it’s a little too on-the-nose, Voight’s growling tone, carefully showing us the cops’ families and hazing the junior officers but it also plays some of the stereotypes quite effectively (I particularly liked the grumpy female desk sergeant). Just like Chicago Fire, this is an incredibly watchable show. The pilot ends on a cliffhanger and I could cheerfully have gone straight into the next episode.
Chicago PD has been picked up for a second season, and aired on 5USA earlier this year

Rake
Greg Kinnear plays a defence lawyer who’s basically screwed up almost everything in his life.
Rake plays things pretty much for the laughs, which is both a welcome relief from some of the other doom and gloom on television and a bit jarring when you realise that you’re supposed to be smiling about a guy getting beaten up by his bookie due to his inability to pay his debts. Kinnear however ladles on the charm and carries it off. The supporting characters of his friends and colleagues find a nice balance between supportive caring and exasperated irritation. Even the legal case was one that I didn’t immediately recognise from several other series. All in all, I found this series quite refreshing and engaging enough that I’d be tempted by the rest of the series.
Rake hasn’t been picked up by a UK broadcaster and was cancelled mid season, although Fox did later air the rest of the 13 episodes.

Black Sails
Pirates, doing the full on pirate thing in the West Indies; a prequel to Treasure Island.
I had pretty low expectations of this, and that probably helped a lot, but I really enjoyed this pilot. It does exactly what you’d expect and hope a period Pirate show to do, there’s sailing, swordplay, secret treasures and shady dealings. It’s not exactly got the big budget production values of Pirates of the Caribbean or Master and Commander, but they do a pretty good job hiding the cheaper corners and the only really noticeable place the reduced cost shows is in the lack of big names in the cast. It is on Starz network in the US and that too shows through in the complete lack of subtlety when it comes to adding in nudity and violence. All things considered though, this made quite a pleasing diversion from endless procedural shows.
Black Sails is available exclusively on Amazon Instant Video in the UK and has been renewed for a second season.

Crisis
A bus load of the children of some of America’s most rich and powerful are abducted, and their parents start getting demanding phone calls.
It’s a very good premise and it’s a very well put together pilot that elegantly introduces a load of characters and sets up various connections and conflicts and establishes that nothing is really as it seems. The cast and characters are all solid, and surprisingly the group of teenagers were not instantly hateable. My only real concern was over how the story would be drawn out over a season, and/or into multiple seasons. It seems like the first season formed a complete story, but the show was cancelled, so I guess further plans don’t really matter.
No UK broadcast information available.

Legends
Sean Bean plays an FBI agent who’s an expert at going undercover, creating elaborate characters and backgrounds. But is he immersing- himself in his covers, or is he losing himself?
This sadly felt rather cheap, which is a real shame because Sean Bean (Game of Thrones, LOTR), Ali Larter (Heroes) and Tina Majorino (Grey’s Anatomy, Veronica Mars) really deserve better. The building blocks are there, but it just didn’t really feel substantial. The science/investigating elements felt unrealistic, the jeopardy manufactured, the characters unoriginal and the relationships tired. The moment where the female agent ‘has’ to go in as a lap dancer just had me groaning out loud and I hate to say it, but I’m not sure that Bean has it in him to play all these different characters.
Legends starts in September on Sky 1 in the UK and is still broadcasting its first season in the US and no pick-up has been announced.

Halt and Catch Fire
In 1983 in Texas a former IBM salesman is manipulating people left-right-and-centre to engineer a new computer which will revolutionise the pc industry.
The title alone was enough to lure me in to this, and Lee Pace (Pushing Daisies, amongst other more huge things like Guardians of the Galaxy) was a nice bonus. I guess to be cynical it’s one of the many shows still trying to jump on the Mad Men bandwagon of looking at under-represented industries and periods, but just because it’s cynical doesn’t make it any less interesting. Unfortunately though the pilot left me a bit cold; it’s not bad in any way, but I’m also not certain that it’s either good or entertaining. I didn’t come away desperately wanting to spend more time with the characters or find out where the story is going to go, which means it rather failed in the key aims of a pilot. I may give it a bit more time, but it disappointingly didn’t set my world alight.
Halt and Catch Fire has been renewed for a second season, but there’s no information on a UK air date.

One thought on “Miscellaneous Pilots”