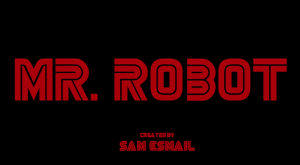 It’s easy for shows to just pass by on Amazon or Netflix; there’s no time pressure to actually watch them. Also, when they’re released in a block for binge watching you don’t get the repeated press and commentary each week for an extended period of time maintaining the buzz and reminding you that you’re missing out.

Mr Robot was a show that for a long time failed to make it onto my radar. Then it started getting nominated for and then winning awards. Proper awards that people actually care about (as much as anyone cares about awards). Do you know what the Golden Globes and Critics Choice thought was the best drama of the year? Not Game of Thrones, Mad Men, House of Cards or any of those… it was Mr Robot. So I figured I should give it a try. It still took me another few months to get round to watching it mind you, but I got there eventually.

Sadly I didn’t make it beyond the second episode. In fact I really struggled to not give up in the middle of the second episode. It’s one of those occasions where me not liking a show is probably more about me than the actual show to be honest. I just couldn’t get into it.

Most of the problem for me was the lead character and particularly the narration that allows us to really know what he’s thinking and feeling all the time. When you’re not getting on with a character, the last thig you really want is to get an even deeper insight into their head, particularly when the head in question is so deeply confused. Whether because of mental disorder(s), self-medication or just being a bit of an asshole, he’s dissociated, sanctimonious and paranoid. Rami Malek’s performance is great, but it just wasn’t much fun to spend time with the character.

Mr Robot is also one of those shows where you can see it all unravelling for the characters. Or maybe actually a better way of describing itself is it all getting tied up in a big knot. Do you do the wrong thing to do the right thing? What’s right anymore? Etc etc. I just found myself bored by it before it even got started.

It’s a good show, and I wish I liked it. It’s talking about some interesting and really current stuff, and has some great performances in it. But I just plain didn’t like watching it. I gave it two episodes, and by half way through the second I really just wanted it to stop. So I stopped it. Sometimes listening to the voice in your head *is* a good thing.