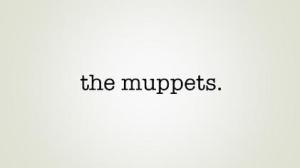 The Muppets mean something to me. I think the world is a much better place because Jim Henson shared his dream with it. I’m far from the only person to feel this way and I’m sure I was not alone when I was simultaneously excited and nervous about this latest incarnation of the Muppet Show being brought to prime-time television. 16 episodes later, my overwhelming emotion is relief that the show stayed true to the fundamentals of Jim Henson’s vision and didn’t trample over that nostalgia. That relief though is tinged with some disappointment and regret that the show just wasn’t… well… better.

I liked the concept; it seems natural to bring the theatre variety show up to date and make it a late night chat show with sketches and guests. It also seems natural to age the target demographic of the show, targeting a more adult market who are nostalgic for the old show, but don’t really want to watch a kid’s show. So the Muppets now not only have to deal with the day-to-day running of a show, but also have lives and relationships of their own. It’s aiming to be less zany and slapstick, and more witty and satirical.

When that worked, it worked really well. Some of the characters moved very easily into that new context, Kermit in particular with his dry wit felt like a perfect fit. The use of the documentary style pieces to camera worked well, giving a window into a bit more of the characters’ personalities. I liked the moments that addressed the fact the characters are all sorts of different animals living in a human world, it was never really dwelled on, but made some amusing asides. Mostly though I liked the nostalgia, I liked the little references back to the original series and that the characters all felt like old friends.

But when it didn’t work, it was really awkward and uncomfortable. Some of the more frat boy antics of the ‘writers’ (Gonzo, Rizo and Pepe) were just painful. Also after the novelty of it being the Muppets wore off, elements such as Piggy and Kermit’s complicated relationship just became the usual tedious, contrived back and forth, except with furry puppets. Many of the guests were quite awkward, not really seeming to know whether to play it straight or play a role. And just like other series with “shows within shows”, (Studio 60, I’m looking at you) the sketches that were supposed to be part of a successful late night show just weren’t funny.

I enjoyed the show, but predominantly, only as filler. At less than 30 minutes, it became an easy choice when I didn’t want to commit to a full length show that might require concentration. I’m not sure that I would have stuck with the series the whole way through if it had required more time or mental energy. That doesn’t sound like a particularly enthusiastic thing to say, but in recent years I haven’t found a half hour sitcom that I could actually stand for as long as I did The Muppets. For all that there were moments that made me cringe every episode, there were also moments that made me smile and it had almost as much heart as the original series. For that, if nothing else, I will miss the show.