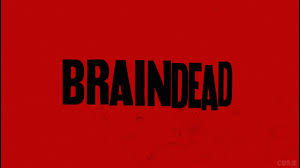 This is easily the most unexpected show I watched this year. It’s one of those times that I wish I could just tell people “watch this” without having to explain why, as it’s just so much better an experience if you have absolutely no idea what it is going to be. I don’t think anyone would regret watching this show, it’s one of my favourite shows of the year and one of the most original things I’ve seen in ages. Go on, give it a try. But for those of you that either won’t listen to me, or have already seen it and just want to know what I think, I guess I’d better expand a bit.

The premise of Braindead is incredibly, perfectly current – why is politics suddenly so nuts? How come everyone seems to be turning into idiots and fighting? The idea that it’s some sort of brain eating alien is really actually no more stupid then some of the things our politicians are actually coming up with. So let’s run with that and do The West Wing with… I dunno, Mars Attacks? That’s probably the closest I can think of in terms of wacky, slightly gross insanity.

There are moments in this series that are just jaw droppingly unexpected. Some of that stems from the ridiculousness of the plot, the pretty disgusting shock moments or fairly horrific implications of what’s happening. But actually, there are just as many moments of “I can’t believe you just did/said that” which are really about politics in 2016. Sharp observations of current events which are beautifully summed up in cutting lines of dialogue.

Individual lines of dialogue that perfectly cut through to the heart and true insanity of modern politics, shock moments of pretty disgusting gore,

Ok, so it does occasionally get a bit bogged down. The politics angles are definitely latter series West Wing with a lack of any real depth or teeth to it. This is by the people that brought you all the seasons of The Good Wife, and there were plenty of occasions there where complexity of arguments was abandoned just to get the plot moving along in the direction they wanted. So there are also few loops of plot that just draw things out a couple of episodes longer, while some plot threads are just abandoned or side-lined until needed. Oh and the romance elements are a bit tedious and high school and the budget was clearly underwhelming.

But, I don’t care. Do you know what I’m going to use to sum up how good this show was – the “previously on” segments. Yup, you know those bits that are really tedious on a weekly basis and even more pointless when you’re powering through a box set watching episodes back to back? The “previously on”s on Braindead should win awards. They’ve managed to make the most fast forward-able part of the show the bit that I actually rewound to watch again and again. I found one that was relatively spoiler free (don’t focus too much on the opening pictures). Seriously, Jonathan Coulton is a genius and if this is how good the “previously on” is, just go and see how great the rest of the show is.