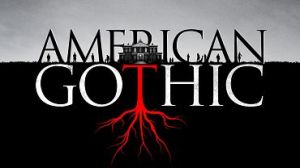 This is proper escapist television, pretty much completely rubbish, but just absorbing enough to keep you from any risk of thinking about the ironing that needs to be done, or the stupid meeting you have to go to. Sometimes I want to watch something meaningful, with plot and character arc and sense, other times I really do just want to watch barely believable tosh. American Gothic thoroughly obliges on the tosh front.

I’m going to assume that the writers were aiming for that, making a deliberate choice to embrace the mediocre, rather than trying to create something smart and missing by a country mile. The Hawthorne family and their close associates are a bunch of either morons, or manipulative assholes, or sometimes both at the same time. Pretty much no one is innocent or really terribly likeable, so there’s not really much chance of getting emotionally engaged.

The twisting and turning of the plot is actually pretty engaging. I guess some will get bored and frustrated with the endless stream of red herrings, dead ends and endless layers of motives. It’s a show that for once these days probably doesn’t work so well if you try to watch the whole thing as a box set, you become a bit resigned and disengaged as the sheer number of twists fall over themselves in a rush. But watching one or two episodes at a time fits the more soap opera style of the story. I felt like I was guessing each reveal only slightly ahead of the characters, which was enough to feel slightly smug, but not so much as to just shout at them for being so dim.

This is like Downton Abbey, or a soap opera – entertaining and diverting. It’s not quite mindless, there’s enough plot to actually keep you listening and paying attention, without really requiring you to engage your brain or get too emotionally connected. That doesn’t sound like very high praise, but it seems to be a rather tricky balance to find on TV with too many just ending up mindless and boring.