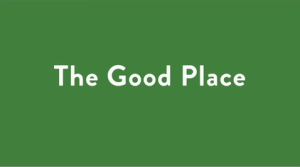 As a quick browse through this site will show, I don’t really watch many sitcoms. I seem to have a very specific type of humour which doesn’t seem to match mainstream television. I can’t abide stupid people, particularly characters who have to act stupid just to drive a plot or get a laugh. That feels cheap and I’m more likely to cringe at their poor choices than I am to laugh at the punchline. If I’m looking for comedy I’ll usually head towards one of the middle-of-the-road dramas which tend to have humour embedded around the serious stories. I’m more likely to laugh at The West Wing, Grey’s Anatomy or Agents of SHIELD than I am at most sitcoms.

So I approached The Good Place tentatively. I was approaching it at all because it has Kirsten Bell (who delivered the perfect mix of comedy and drama in Veronica Mars) and Ted Danson (who I’ve loved since Cheers), plus I had got incredibly bored of dismissing everything on Netflix as “not quite what I felt like” and this at least was only 1/2 hour. A few hours later I’d watched the whole of the first season, pretty much back to back.

That’s not actually as impressive, or as big an endorsement as it sounds. Each episode is in fact only 22minutes long and there are only 13 episodes, so it’s less than 5 hours long, about two films worth. Even taking a few breaks to putter and do some chores it was easy to watch it over the span of a day. The episodes are so short, and the episodic elements so minor, that I would imagine watching one episode per week would be incredibly unsatisfying and dull. But there’s a well paced arc playing out over the season as a whole, with some satisfying twists and developments towards the end, which makes it very well suited to box set viewing.

I wouldn’t say it’s a show that will go down in the annals of history as one of the greats. It’s got some funny moments, some clever observations, and a couple of chuckle-worthy recurring gags, but nothing that’s really going to be replayed over and over as comic genius. The characters are built from stereotypes, but most of them add a level of richness that elevates them into the realms of interesting and natural feeling. The world that’s created is a fun one, although if anything it’s slightly underused in the middle episodes. It’s a series that was nice to spend a weekend with, but probably nothing more. I won’t be rushing to watch each episode of season 2 as they arrive, but I will quite look forward to the weekend when I eventually have all of them available.