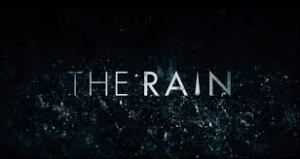 The Rain is effectively a Danish, post-apocalyptic young adult novel, there was really no way I wasn’t going to watch it. It ticked all of the boxes for the type of things I gravitate towards, but then have no idea why I’m really watching it. I guess Britain and America can make any amount of shows that are fairly mediocre and yet still get audiences, why shouldn’t Denmark.

Don’t go in expecting a plot that really makes any sense. The setup is that the rain makes people get sick, one drop and you’re a foaming gibbering dead person walking. Simone and Rasmus are just children when they find themselves all alone in a bunker as the world outside disappears. 6 years later they emerge, join a passing group of other young adults and set off on a slightly incoherent quest.

The eight episodes play out pretty much as you’d expect, hitting as many tropes as they can along the way. Most of the characters get little flashbacks to show you who they were before the disaster, and there are some glimpses of interesting ideas there, but none of them go anywhere. How any of them survived any length of time is a bit of a mystery as their decision making is dubious at best and they are very easily distracted by a whole network of love triangles and secret crushes. The acting is all solid and Alba August as Simone is particularly interesting to watch doing a really good job portraying someone who is still a child, but also has to be the adult for everyone. Netflix offers an option of a dubbed version, but you lose too much of the characters and I lasted less than 5 minutes before it drove me to distraction and I reverted to subtitles.

The setting is at least something different from the usual America, and some of the scenery and even rundown city settings are really stunning, definitely making a change from the usual filming locations of warehouses in Vancouver. At eight episodes long, it’s a short sharp burst that doesn’t really set the world alight, but it is passingly entertaining. N