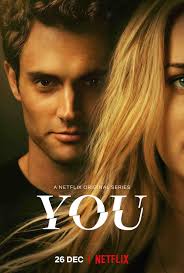 Netflix was pushing this fairly heavily, but I’d dismissed it slightly out of hand. I’d spotted that it was based on a book by Caroline Kepnes, and I’d recently read her second book (Providence) and been underwhelmed with unconvincing relationships and a distracted story. But then the buzz for You started building and I was informed by a couple of people that I HAD to watch it. So I did. And once I’d started I couldn’t stop.

It’s the kind of show that if I describe the individual elements and how I feel about them, it would probably make you think I didn’t like it. It’s about a group of 20-something New Yorkers who are by and large pretty awful people. The central story focuses on, and is largely narrated by Joe, a quintessential Nice Guy bookshop manager who falls for wannabe writer Beck, who is equally the quintessential Writer – she’s struggling to make ends meet and yet lives in a stunning apartment, is rarely seen working (either on her writing or her job as, of course, a yoga teacher), and is always out at expensive bars. Her circle of friends are rich and vapid (one actually has a job as an instagram influencer). Joe immediately becomes obsessed with Beck and things spiral quite rapidly in some incredibly creepy and violent directions, it very quickly becomes clear that Joe is quite the expert stalker and there’s a lot in his past that he’s not sharing.

What really pulled me into the show though was the voice over. We are watching the show from inside Joe’s brain, he’s narrating and talking throughout, explaining why he’s doing what he’s doing. While that never justifies his actions it does explain why he is doing everything. You can track the logic chains and while they are generally started by an idiotic choice that is unforgivable, you kind of understand why things keep going as they do. Joe does monstrous things, but because we are in his head, it’s hard for us to view him completely as a monster. He’s a fascinating character, elegantly written and subtly played by Penn Badgley.

Unfortunately that’s more than can be said for most of the rest of the characters, all of whom are pretty one dimensional. I found Beck a deeply annoying and unlikeable character. The fact that she’s far from perfect makes for some interesting twists and turns for the plot, but I never really understood her choices. Because we’re not in her head as much as we are in Joe’s, we don’t get the same insight into her motivations, so she comes across as shallow, selfish and inconsistent. While I don’t want to drift into victim blaming, she does make poor choices that have consequences in her life, and just because she IS a victim, does not actually make her a nice person.

This imbalance is what stops the show being great I think. The development of Joe’s character and the way he is presented makes a high quality drama (while still also having plenty of laughs from his dry observations), but because everyone around is flimsy, it undermines that central richness. It also makes it slightly uncomfortable when the aggressor is allowed more opportunity to be sympathetic than the victims are – they don’t have to be likeable, but if they’re not rounded, it just starts to come across as more of a cheap slasher than as a psychological drama. It’s still a hugely compelling and entertaining show to watch, but it could have been more.