Naomi Novik – Spinning Silver
It wasn’t until I read the blurb just now that I realised that the story is based on Rumpelstiltskin, making this book another entry in the growing genre of retellings of classic fairy tales. The story starts out simple, with a couple of young girls taking agency to deal with their own local problems, even though they should be powerless. Gradually the story adds more threads, expanding as events involve more groups of people, expertly building up a complex and vibrant world of politics and magic, with a core group of strong , yet human women at the centre. I do think it maybe got a little too complex and went on a bit too long with more and more levels of pan that left me a bit overwhelmed at times. The story is all told first person, but there are a few too many people who take a turn (I’m never a fan of young children acting as narrator, they’re just too unreliable and drawn out) and it gets a little crowded. However even though technically I can see those flaws, I enjoyed reading every page, so it seems a bit silly to complain that the enjoyment went on too long.

Jessica Fellowes – Bright Young Dead
Not gripping unfortunately. There were too many characters, too many cases and too much meandering about. Everyone seemed to lose track of what was actually being investigated, characters made stupid mistakes and obvious routes of investigation were completely ignored until at the last minute someone asked the obvious questions. The first book in the series felt a little different as it was more from the maid’s point of view, but this novel felt like the writer had to keep engineering situations so that she could see the lives of the rich from the point of view of the maid who would never have been there. It just felt clumsy and unsatisfying, I don’t think I’ll bother with any further books in the series. 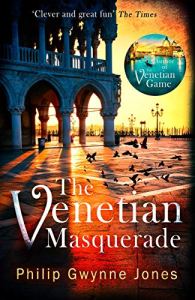 Philip Gwynne Jones – The Venetian Masquerade
Another thoroughly entertaining entry in this series. Venice is still the star, the descriptions of the city so vibrant and personal, but the rest of the elements of the book are no slouch either. A bit of time has passed since the last book and the recurring characters have all grown and settled and are lots of fun to spend time with. The mystery itself is solid, and although the world of opera does nothing for me, it gives a justification for some rather over the top characters to play out the mystery. A comfortable page turner that was just nice to settle in with.

One thought on “Books in June”