Oops, I missed a month out!

Mark Hayden – The King’s Watch series: The 13th Witch, The 12 Dragons of Albion, The 11th Hour, Tenfold, Nine of Wands

I discovered this series through Kindle Unlimited and have charged through the first 5 books and 2 novellas. Fundamentally it’s not hugely original – a hidden world of magic just out of sight to us mundanes/muggles to which an outsider is introduced and starts turning things upside down while trying to find his way. Conrad Clarke is an interesting central character to throw into chaos, he has a background in the RAF giving him formality and a calm approach to chaos, but also a hinted at criminal past that gives him a more dangerous edge. One thing that I really like is the respect he shows to everyone, he doesn’t arrive in a new situation and stomp about, he cautiously gathers information and defaults to politeness and open mindedness. However as the books go on and he develops more confidence I was starting to find him a little bullying, in a way that made perfect sense for the character, but did make him less likeable.
The series has a wonderfully rich and well developed universe, but it is a bit complex and the books can get bogged down in exposition, including recapping what happened in the previous books. About 3 books in I also discovered that the irritating hints at some of the characters’ histories were actually referencing another trilogy of books by the same author which was a bit frustrating. However I’m now reading that series and while the books are very good, what they reveal about Conrad put’s a very different spin on the character that makes him a much more problematic character.
The supporting characters are all very well developed and varied, and play in interesting ways with Conrad. However there are a lot of them so sometimes individuals disappear for a long time and that really does leave a gap.
The books are good fun to read and charge along at a fast pace, I found them very hard to put down. In fact one of my slight criticisms is that most of the books span only a few days of real time and they run straight into each other, giving neither characters nor readers time to breath and settle into the events and relationships. I am a little nervous now of Conrad and find myself questioning his character a lot more, but even with that slight sour note, the universe, story, and writing is good enough that I’ll continue to seek out the series.

Jules Verne – Journey to the Centre of the Earth

I remember really enjoying this book as a kid, in fact I distinctly remember doing a book report on it at school. However with a grown up eye, it’s much less pleasing and actually quite frustrating. Even though the overall concept of taking a walk to the centre of the earth is bonkers to our modern understanding, I can accept it for the book, but the problem was that it was written almost as a scientific work. So huge amounts of time was spent explaining what was going on with the physics and geology, some of which is true, some of which was thought to be true at the time of writing, and most of which was made up completely. But it was impossible to tell which was which. Plus I’ve got no real interest in reading dry science if it isn’t even correct. Take that out and there’s a fun story with some charming characters, but that was a minority.

A really horrible book to read. For a start the plot is kind of depressing – one of those “surely this could never happen” visions of the future, that is sadly these days not as unbelievable as it should be. But mostly because the writing style is just awful. The entire 450 pages is made up of fragmented thoughts and dialogue. I understand what the author was trying to do, to reflect that people don’t really think in whole sentences, and often don’t talk in them either; but it makes a deeply unpleasant reading experience. I speed read about 80% of the book hoping that I’d get something out of the plot, even if I couldn’t stand the actual words on the page. Sadly that didn’t happen as the plot is also fragmented into jumping time streams that I lost track of and couldn’t be bothered to unpick. I really don’t know why I bothered finishing it.

Helen Czerski – Storm in a Teacup: The Physics of Everyday Life 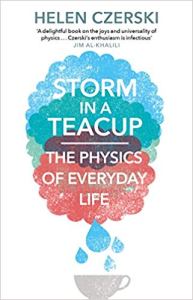 I’m always on the lookout for a good popular science book and this is absolutely everything I look for.
1) It’s definitely science, it covers a huge range of subjects from large to small, across every branch of science.
2) It’s popular. Every subject is explained in an incredibly understandable way, the descriptions of what is happening are simple and visceral, experiments can be recreated or easily visualised. The explanations meanwhile are built up from simple first principals that make everything incredibly approachable to anyone that’s studied GCSE science.
3) It’s written by a human being. Helen Czerski’s voice and personality come shining through and she’s a joy to spend time with. She conveys a sense of wonder at the world and exudes a curiosity of a true scientist, both are incredibly contagious.
I loved this book. It absolutely captured for me why I wanted to study science, not to delve deeper and deeper into the world of maths, but to be able to understand and explain why everyday things happen. I read the whole thing in just 3 days and would cheerfully read a whole series of these books.

David Walliams – The Midnight Gang
A solid book for kids that reminded me a little of Roald Dahl, with very much dialed down bite. The illustrations are lovely and really bring the book to life and I can see why it would really appeal to younger readers who will get some good fun and some nice messages from it.

One thought on “Books in October and November”