I’ve bought more hardbacks this month then I think I buy most whole years. I’m not sure whether that’s about my reading habits during Covid (overwhelming desire to curl up in an armchair/deckchair and lose myself in a book) or if all the authors are condensing releases targeting for Christmas. Either way it’s a bit expensive and a bit harder on the wrists and hand muscles to read them. Particularly when they are absolute beasts like….

Robert Galbraith – Cormoran Strike 5: Troubled Blood
If JK Rowling had managed to keep a secret that she was writing these books, I think the increasing page counts would probably have given her away by now. This book thuds in at 940 pages, nearly half as long again as the previous one, and in hardback it was actually a physical challenge to read at times. The book does cover a full year, and multiple cases, but it still feels like a good edit would have substantially tightened up without losing anything important. Still, given that I enjoy the company of the characters and even the meandering side plots are well developed, it seems a bit silly to complain about the experience lasting longer. I’m still frustrated by the “will-they-won’t-they” relationship and am firmly in the camp that they “shouldn’t” so feel it’s all a bit manipulative.

Richard Osman – The Thursday Murder Club
This is a lovely little murder mystery novel. Set in and around a retirement village, a group of residents regularly review cold cases supplied for a retired police officer and then find themselves involved in a present day murder. It’s a lovely idea and all the characters are vibrant and large, usually just the right side of credibility. It’s on the lighter side of crime fiction, but also has some real emotion in it and doesn’t gloss over the wide ranging effects. I think if I had picked this book up randomly I would have nothing but praise for it, but with the name Richard Osman on it I was expecting a little more. There were occasional flashes of his wit, and there were some lovely bits of observation, but they were a bit few and far between when I was hoping for more. Still, an excellent first novel and I look forward to reading more. 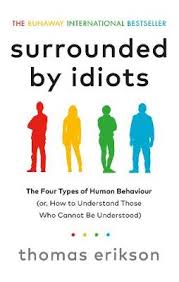 Thomas Erikson – Surrounded by Idiots
Another business psychology book that tries to group everyone into a limited number of categories to help us all manage our day to day lives. The title resonated with me, and I am also familiar with the ‘Success Insights’ categories and have found them really useful for understanding both myself and others, and using them to improve my working relationships and team dynamics. Unfortunately this book is not a great advert for the system. I found the book depressingly negative, talking extensively about the negative aspects of each colour type, and how frustrating other colours find their counterparts. Too much weight was put on weaknesses rather than how to channel traits effectively. Also the book talks exclusively about single colour types, but points out that by far the majority of people in the real world are a blend of at least two colours, so the examples felt like stereotypes pushed too far. The book isn’t without value as the underlying approach is solid and even the broad strokes are helpful, but by the end I really didn’t want to spend any time with any of the colours, including my own. (680)

Jennifer Bell – Wonderscape
Three young teenagers are randomly transported into the future and into a virtual reality game where they have to solve puzzles and challenges to return home. It’s a solid idea and competently told, but some reason I just didn’t quite connect with it. I always felt that if I looked too closely at anything it would fall apart, characters and world were all a little flimsy feeling, lacking in depth and solidity. I can’t really point at anything specific that was wrong with the book, so it may well just be me.

Neil Gaiman – Stardust
I think this may be one of the rare occasions that the film is superior to the book. To be fair, I’ve loved the film for many years before finally getting round to reading the book, so it was impossible for me to read it without automatically connecting bits to the film. It’s also one of the rare occasions where I think content was added for the film (eg the extended section on the lightning ship) and aspects such as the ghostly brothers played better in visual media. The book is still a lovely read, and obviously the film wouldn’t have existed without it, but in this case I’d say there’s not really much to gain from reading the book over watching the film.