Naomi Novik – A Deadly Education
Naomi Novik is one of the author’s who’s novels I pre-order the hardbacks for, that’s about as high a complement as I can offer an author. The only greater compliment is that I’m thrilled that this is the start of a new series, even the greatest authors I often prefer to get new worlds and new ideas rather than extend existing ones. But Novik has created a world that is both comfortably familiar and original. I would probably describe it as Harry Potter meets Lord of the Flies; what would it be like if Hogwarts was trying to kill its students? The book also plays with the idea of good wizards and bad wizards, what if the supposed ‘heroes’ were making things worse and the actual hero was the one who was born with all the evil power? I was completely engrossed with the characters and the set ups and cannot wait for the next book in the series. 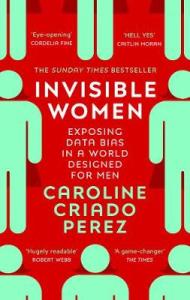 Caroline Criado Perez – Invisible Women
I’d put off reading this book for a long time, because despite being on subjects that I’m passionate about, I thought it would make me angry. By the time I did read it I was so aware of the contents that my anger was muted down to a frustration and my overwhelming feelings were of sadness and tiredness. The contents form an overwhelming narrative of how women are discriminated against through being absent in the data. Whether it’s in politics, town planning, medicine, or design of the specialist and everyday tools, women’s voices are excluded and their absence in the data means that we can’t even understand just how serious the impacts of that is, although even the small amount of data indicates that huge numbers of lives are being lost, and economies are suffering.
While the contents and messages in the book are outstanding, I’m afraid the writing underwhelmed me a little. The quality of the research, evidenced through the volume and range of footnotes is outstanding, but occasionally lacked the human element and I would have liked a few more deep dives with interviews and anecdotes from individuals. I also struggled at times with the structure as it seemed a little meandering at times and some of the most shocking and impactful of cases, ones that people may not think of or be familiar with (eg car safety testing without any need for female crash test dummies) felt a little buried.
It’s a fascinating, powerful and vitally important work which I would highly recommend to anyone, even if the readability could have been improved a little bit to make it a truly outstanding package. (692)

Neil Gaiman – Norse Mythology
There’s something about re-writing myths that seems to make even the most talented or charismatic of writers revert to the same simplistic and flat tone. Stephen Fry was guilty of this with his Greek myths, and Gaiman does the same here. The stories themselves are fantastic, and I was less familiar with the Norse ones, but the delivery is boring. Gaiman loses all sense of world building, characterization and plotting and just retells the myths by rote. You end up with written out complicated family trees, no emotions from the characters, no relationships, no development. Maybe it’s because he was trying to stay so faithful to the myths that he felt he couldn’t embellish, or maybe the stories just don’t hang together if you go more in depth, but I want more from a novel even if it means taking some creative liberties with the myths themselves. I expect better from writers of this talent.

Christopher Somerville – Ships Of Heaven: The Private Life of Britain’s Cathedral
I’m fascinated by cathedrals. Wherever I travel, they’re always top of my list of places to visit. They’re just so extreme, the scale of them is completely other worldly and usually built so long ago that it seems like a miracle that the knowledge even existed on how to build something so immense to last so long. Unlike castles and skyscrapers, they’re built with love and passion, with a view to last and for appreciation through the ages by more than us mere mortals. Christopher Somerville’s book captures exactly what I find so fascinating and awe inspiring about cathedrals, including the fact that it has very little to do with religion and belief in a higher power.
Each chapter is about a different cathedral in the UK and he talks to the aspects that are most relevant to each one – the architecture, the craft workers, the glass, the history, the art, the place in the community, the people working there, the music. The cathedrals are centres of cities and communities so the book also tells you a little about the cities and the people. The scope of the book is huge and I wasn’t always satisfied that it lingered in the right places and skipped quickly over the right ones too, and the language did tend towards the flowery which made my eye’s roll a bit. More pictures would also have been wonderful. A good whistle stop tour, particularly for the behind the scenes access and conversations with those working and supporting the cathedrals today.