A quiet month of film watching, but I watched a fair number of new releases and it even ended with a return to the cinema! It was good to be back, particularly as I went at exactly the right moment for my brain – it wouldn’t shut up worrying and stressing about stuff and two and a half hours of escape to a dark room with a distracting film to focus on was the perfect cure. Now we just need more films to be released and we’ll be off and running. 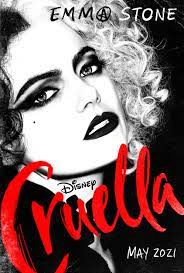 Cruella
Cruella is a cleverly put together film that’s both classic and original, mixing up lots of familiar ideas and tropes into something that feels fresh and fun. The characters are a lot of fun and brilliantly performed, particularly by Emmas Stone and Thompson but also by the large supporting cast, and even some animals. The film looks absolutely stunning and the costume design is particularly outstanding. My only two criticisms are that it was a little too long at 2.14, and that I don’t think that it joins up to 101 Dalmatians particularly well. Ranking: 8 / 10 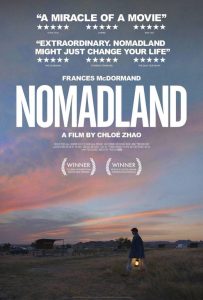 Nomadland
I came away from this film feeling a bit… blank. Not really deeply moved, but also not unaffected, just not quite sure of what I was supposed to be taking away from it. Maybe nothing, maybe it was just supposed to be a peek into a community and way of life without coming to any big conclusion, but it felt like I should have a stronger response. The film is very well made, it looks beautiful and holds the attention all the way through. The use of non-actors rarely feels obvious, but maybe that contributes to the lack of direction to it, that makes it feel half like an insight documentary rather than a narrative film. It’s well worth a watch, and maybe the strangeness of it is actually a brave new creation, but I was left wanting a little bit more. Ranking 8/10 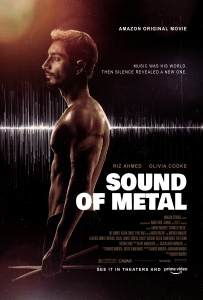 Sound of Metal
This is a powerful and really well constructed film that hits all the right notes (pardon the pun) with rich characters and a well paced story with innovative film making that really draws the audience into the main characters experiences. The way sound is used throughout really immerses the audience into the stages of hearing loss that the Ruben is going through, but because it’s not solely from that point of view, when we switch back to the ‘normal’ sound it really heightens what he’s lost. I would say that there were sections of the film that I really didn’t enjoy because of these effects, the muffled or dissonant sounds are quite unpleasant to listen to (I was glad for once to NOT have a cinema sound system) but that discomfort it absolutely a part of the film. Riz Ahmed is miraculous as Ruben, an incredibly complex character going through something utterly life changing, it’s hard to know how anyone would react, but Ahmed’s performance is completely believable and relatable. The only downside is that this focus does mean a lot of potentially interesting supporting characters are quite one-note, they’re all from Ruben’s point of view and felt a little bit ‘used’. However overall, this is a fascinating, impressive and important film that really exemplifies what film can do. Ranking: 9 / 10 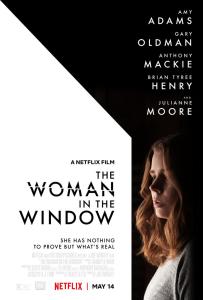 The Woman in the Window
There are some sub-genres that can be described in a lot of detail, or you can just refer to the classic film that has spawned dozens of similar offerings. In the case of The Woman in the Window, it’s in the sub-genre of “Vertigo” – someone trapped in their house watches their neighbors and seems to witness a murder, but no one (including the audience) is quite sure if they really did or not. In this case we get the always watchable Amy Adams playing an agoraphobic, separated from her husband and young daughter, watching the family over the street. It’s a reliable set up and it’s very well delivered, it kept me guessing about what had really happened and whether it was a hallucination or drunken mistake. The film is well paced with just enough twists and turns before delivering a satisfying conclusion, all in just 1.40 to make a very solid entry into the sub-genre. Ranking: 8 / 10 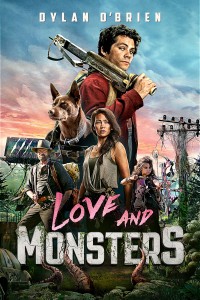 Love and Monsters
This is a very knowing film, it’s a monster film where the characters have all seen monster films. However despite the sarcastic and self-aware narration, it doesn’t actually come across dark and bitter. It’s as if it knows what works, and knows that it’s not better than what came before, or trying to dramatically reinvent the genre. On top of the monsters element is the love bit which plays out quite sweetly really without getting nauseating. There are a few bits of CGI that look a little on the low budget side, but even that somehow felt fitting for the film. I really enjoyed it and was both relaxed in how predictable it was and satisfied at the small innovations. Ranking: 8 / 10 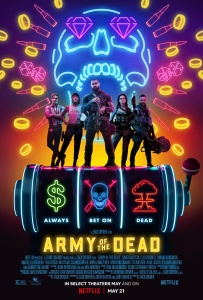 Army of the Dead
Good grief this was rubbish. And to add insult to injury it was LONG and rubbish. 2.5 hours of banging and crashing, atrocious dialogue, dull characters, mediocre acting, predictable story and frankly, boredom. The concept was solid enough I guess (a band of mercenaries stage a heist in a zombie-occupied Vegas – Oceans 11 meets Walking Dead) but everything beyond that was poorly done. There was no richness to the characters, too many subplots and relationships all spread too thin to give any satisfaction. I didn’t care and I was bored. Oh, and it lost another mark because of the entirely needless gratuitous nudity at the start. Ranking: 4 / 10 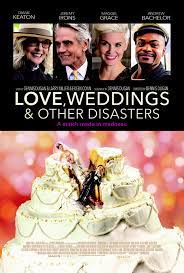 Love, Weddings and Other Disasters
Another film trying to be Love Actually (or similar) and not quite working, but it’s a near miss rather than a complete disaster. Most of the threads are engaging enough with likeable performances, quirky (but not too quirky) characters and some sweet relationships. Surprisingly what let it down for me was the older generation, Jeremy Irons and Diane Keaton hamming it up, alongside the very depressing choice of not casting an actual blind woman in the role, which is just not acceptable. Other than that glaring miss-step though the film is fairly watchable, but not really more than that. Ranking: 6 / 10 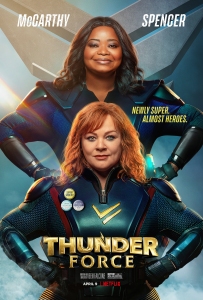 Thunder Force
I like Octavia Spencer a lot, and she is worth suffering through this film. The concept is also not terrible – two middle aged women are the only heroes with super powers but have to learn how to use them. But I’m afraid I didn’t really get on with the rest of the film, particularly the brand of humour that tends to come with Melissa McCarthy. She’s a very talented actress and comedian, but the cringy, slightly crude comedy just isn’t my thing. There were a few moments that did make me laugh, so it wasn’t a disaster, but I just didn’t laugh enough. Ranking: 6 / 10 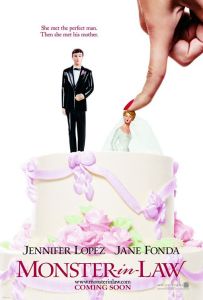 Monster-in-Law
I had exceptionally low expectations of this going in, as I was persuaded to watch it on tv one evening. Astonishingly, it was actually really good. It knows exactly how cheesy it is and embraces it, managing to balance the cheese, funniness and sweetness. My only complaint was that there wasn’t more of the hilarious side-kicks, but then that would take time away from Jane Fonda which would also be a crime. Ranking: 8 / 10 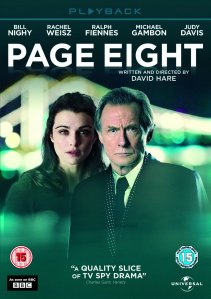 Page Eight
Bill Nighy and Rachel Weisz in a British spy drama, a low risk choice you’d think. Wrong, it’s terrible. So bad that I didn’t even finish it, and I ALWAYS finish films. There was no creativity, just cut and paste from various spy dramas set in the cold war and plonked into the 21st century with a bunch of supposed professionals who don’t talk to each other, spend more time playing politics than doing their jobs and generally just being assholes. All of that is then delivered with no creativity or style from the production team, and zero energy from the actors. It just felt like the whole thing was thrown together with no love or effort and I couldn’t be bothered to waste my time on it. Ranking: 5 / 10