This was probably my worst month for film watching in years. I managed one cinema trip and two new releases on digital and then just 2 other random watches. Really quite pathetic.

In the Heights
This is a really joyful film to see in the cinema on a massive screen. The vibrancy of the neighborhood, the characters, the music and the dance routines needs to be as all-encompassing as possible. The plot of the film is a little meandering at times, but it follows a group of inherently good and likeable characters trying to navigate the world around them without malice or ‘bad guys’ so I didn’t mind too much. The music is fun and creative while it’s playing, but nowhere near as catchy as other musicals (incuding Hamilton) and I couldn’t remember a single tune by the time the credits finished. But the dance routines that accompany the songs make up for that with a combination of musical classics and original creativity. I don’t think it will be a film I necessarily remember, but it was a wonderful watch at the time.
Ranking: 7 / 10

Stowaway
Three astronauts set off on a 2 year mission to Mars and they discover they’ve got a stowaway. They can’t turn around, an accident has damaged the life support and there isn’t enough oxygen for all four of them. It’s a combination of psychological drama and some solid sci-fi action, it felt like a high budget episode of the Twilight Zone. There’s no ‘bad guy’, just a group of people in an impossible situation trying to do the right things. The cast is great cast and they do a lot with a script that’s light on words but heavy on content. There are a few plot holes and coincidences that are convenient for the drama, but I’ll forgive them as they get the emotions to the right place.
Ranking: 8 / 10 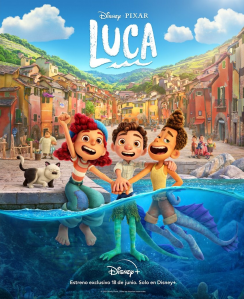 Luca
A perfectly fine animated film, with a somewhat wacky concept that just about holds together, but really doesn’t do anything particularly remarkable or memorable. I expect too much of Pixar films, but this just felt like the kind of thing many smaller budget studios could produce. It was absolutely NOT bad, the characters worked, the voice cast was solid, the story did the job, and there were enough nice messages and heart to keep things going. But it just felt really generic with no creative innovation, deep emotional impact or anything that I’ll remember in a couple of days time.
Ranking: 7 / 10

Raya and the Last Dragon
I’d been holding out until I could either see this in the cinema or it became free to stream on Disney+, I’m not paying £20 ON TOP of my subscription to see a film. In the end I saw it when it was added into the normal subscription and I’m glad I didn’t pay extra money to see it. It was very mediocre. It was a bad sign when it started with a prologue explaining history, then there was another chunk set in the past before finally jumping forward to the present. Then we set off on a quest to collect doodads and the plot kept getting more convoluted with different magics and skills and sets of people and locations and… it was all just too much. The essence of the film was lost, it wasn’t much fun to watch and with the exception of the roly poly bug and one scene of a dragon exploring, there wasn’t any personality, charm or style to it. Really disappointing.
Ranking: 5 / 10

Godzilla: King of the Monsters
I guess it was fine? I forgot to review it at the time and now two weeks later I have very little memory of it. I think the plot was a bit daft, but then does the plot really matter in these films. It was a bit long, but aren’t all films these days. I suspect I would have been more engaged on the big screen, but it’s a solid enough watch on small screen to hold the attention and then forget about it.
Ranking: 7 / 10