There are ten nominees for Best Film at the Oscars this year, and I’d actually already seen six of them without even trying, and picked up another two without much effort. Normally I have to do a bit more deliberate watching, but even the ones I’d missed I had intended to see in the cinema, it just never quite worked out. I don’t know whether this means they’re a bit more mainstream, or just that pickings are a bit slim this year both for award fodder and cinema choice. I have to say, I’m not massively overwhelmed.

I’ll do a post later in the week covering all the other categories. 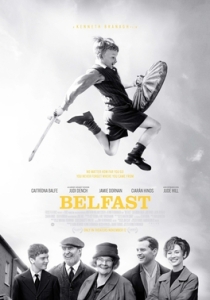 Belfast
It’s hard going to see films that have already got a lot of hype and buzz about awards, you go in looking for certain things, and even if you do find them, some of the magic is lost. Belfast is a solid film, with an interesting story and point of view, engaging characters and is very well written and shot. But because it’s being so lauded, I dwell more on the problems. Firstly, I didn’t really understand the politics in Belfast at the time. Maybe it really does just not make sense, and I shouldn’t be so ignorant of history, but I doubt I’m the only one and it meant that I really didn’t understand where the violence and terror was coming from, it just felt un-grounded. I know the film is kind of told from the point of view of the child, and he wouldn’t get it either, but it didn’t make for a very satisfying experience. The other problem I had was the black and white. It just didn’t feel like it added to the film at all and the way that scenes on cinema screens were in colour made no sense to me. It’s a good film, but it felt like it was trying too hard to be too many things and didn’t quite deliver any of them as well as it could. 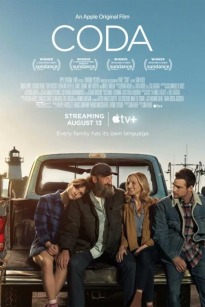 CODA
I signed up for Apple TV+ mainly to watch this film and it was one of my better decisions. It is a brilliant film, doing all the things that a good film should do – saying something interesting, exposing you to a world different to your own, being beautiful to look at and fun to watch. The characters and locations are vibrant and immediately believable, the family are each fully rich personalities in their own rights, but with complex relationships and groupings between them. The specifics of the story are original, but the themes more universal so there’s both something new to experience and something relatable. The only minor gripe I had was some of the nuts a bolts of Ruby’s discovery as an amazing singer felt a little bit of a stretch. I cringed at the singing teacher making the teenagers sing Lets Get it On and romantic duets. But this is a coming of age story and a feel good film so I’m not going to get that cross because the film had me utterly gripped throughout and has really stayed with me. 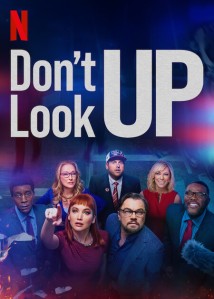 Don’t Look Up
Satire is tricky. Particularly at the moment when the real world is pretty ridiculous all by itself. If you make the situations and characters too extreme then it’s just silly, if you don’t make them extreme enough, it just feels like a drama. I don’t think Don’t Look UP quite got the pitch right, pushing it to be too silly. The biggest problem for me was that the ‘bad guys’ didn’t seem to make any sense. I didn’t understand what their plans were, and so I couldn’t buy into it. I liked the ‘straight’ characters, particularly Jennifer Lawrence’s performance. But I didn’t find the film funny enough or satirical enough to really completely enjoy it. To be honest, it feels quite out of place on this list of nominees and more a point about the message, than about the quality of the film.

Drive My Car
Of course one of the ones I missed out is the foreign language film. Rubbish of me. 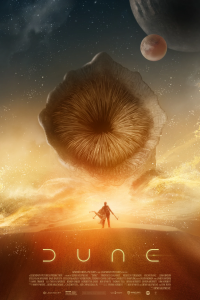 Dune
I read the book years ago and really loved it, a proper classic sci fi novel although it occasionally drifted too far into the mystical for my tastes. Then I saw the original Dune film and was utterly underwhelmed, it had already aged very badly and seemed to focus on all the bits of the book that I didn’t like. But I was quite enthused with Denis Villeneuve taking it on, and decided to push the boat out and see it in imax. I wasn’t disappointed.
The film is stunning to look at for a start, design work that builds from all that has gone before it, both Dune itself and every other science fiction series since. It’s definitely worth seeing on the biggest screen possible to get the scale of it. Also the soundscape is phenomenal and benefits from a massive sound system. But all that would be nothing without a decent story, characters and performances and it’s solid on that too. Frank Herbert’s world building supported an epic series of books and the film’s writers have carefully crafted something that demonstrates that richness without overloading with exposition or complexity. The acting is similarly well done, personalities, relationships and emotions shown not told.
My only challenges to the film is that despite all that richness it sometimes felt a little flat and cold. The dream sequences are integral to the plot but can make it a bit hard to engage with emotionally – what’s real, what’s certain, what’s destiny that cannot be changed? There is a sense of wonder from the characters, and strong connections between them, and yet with the exception of Jason Mamoa again leaping off the screen, they lacked warmth and humour. Everyone felt like they were characters with specific roles in an epic story, rather than real people living their lives.
So overall, wonderful to watch, intellectually engaging, but just a little cold to really care that much about.

King Richard
I’ve not seen this one, I tried to but the film times never quite worked out. 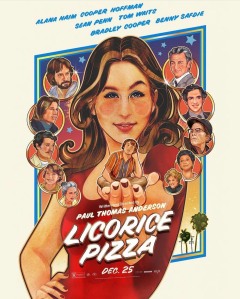 Licorice Pizza
I did not like this film, although explaining why isn’t easy. It suffers from overlong and under plotted, an awful lot of noodling about; that can work if the characters are interesting, but I never quite got on board with them. I was constantly confused by how old everyone was and how much time was passing between scenes, and unsettled throughout by questions around the age differences and appropriateness of relationships. The acting was good, and there were some fun sequences, but overall I was left a bit bored, a bit confused and a bit creeped out. 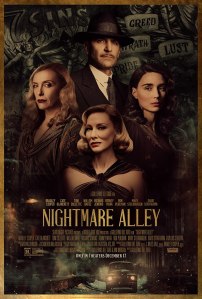 Nightmare Alley
A film of three parts. The first third was really interesting, beautifully shot and creatively filmed it shows a newcomer arrive at a 1930’s freak show/carnival with a lot of emotional baggage and very little actual baggage. It’s atmospheric, the characters are larger than life and everyone has history, secrets, tricks and personal codes. I really loved it and was settling in. Then there’s a time jump and the next third is a much more traditional noir, with scam artists and multiple levels of deceit. It was unoriginal, cliche, lacking in any subtlety and even the visual style was nothing that hasn’t been done before. I was really disappointed. The worst thing thought is that there’s a third part of the film that I have no idea where it was. There was a two hour film stretched out to a two and a half hour runtime completely unnecessarily making me fidgety and frustrated as everything dragged on. So 1/3 great, 1/3 cliche and 1/3 completely unnecessary. Not a very good ratio and I expected a lot more from Guillermo del Toro. 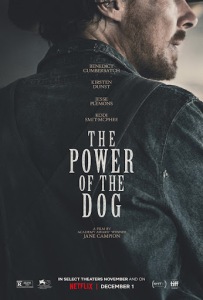 Power of the Dog
Some of the blurbs of this film describes Benedict Cumberbatch’s ranch owner as “charismatic” and even “brutally beguiling”, but I never had that kind of reaction to him at all, I just wanted to be as far away as possible from him, and that meant I didn’t want to watch the film. Having a hateful character is one thing, but it needs to be balanced with something else to make you want to watch the film, other characters, or even just a story, but there wasn’t anything in this film I wanted to see. The other characters were all poorly developed and fairly stereotype and although the film was beautifully shot it still wasn’t enough to hold my attention. Maybe because of that wandering attention I missed some nuance because it felt like there were a couple of big character shifts that had little motivation. It’s a good performance from the actors, and a pleasing change of type for Cumberbatch, but there wasn’t enough substance to the film. 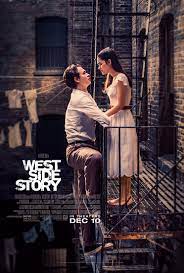 West Side Story
I really didn’t like the original and while some of the problems are fixed, there’s a lot that just carries over. The two things that can’t really be changed are the story and the songs and neither is too my taste. I can respect the songs, but I don’t like them, although at least this version has the actors singing and so doesn’t have the dubbing issues. The dancing I also got along with a bit better this time, the choreography and scale of it meant I stayed focused on it and could see much more the beauty in the mixture of ballet and salsa and jazz.
The story remains annoying. I don’t really get the starcrossed lovers thing – “I’ve seen you across a crowded room and now I will throw away all our futures for you”. The chemistry between Tony and Maria was solid and had a joy to it that I liked, but it didn’t completely blow me away and there were some very problematic character choices.
The final issue, I’m not sure whether it’s the film’s problem or my own. The natural language of many of the characters would be Spanish, and the decision was made to keep it in Spanish and not subtitle it. I understand that either of those options would be disrespectful, and I respect that choice, but at the same time, it meant there were large chunks of dialogue that I couldn’t undrestand. Yes, you can get the gist by context, tone and body language, but it meant I couldn’t engage fully with their characters and stories.
The film is beautifully designed, shot and directed; the cast all very solid… but the material does not sing for me, making the two and a half hour runtime a bit of a slog.