This was a better month for films with fourteen watches, partly thanks to a couple of weeks holiday. I managed 3 trips to the cinema – Fantastic Beasts: The Secrets of Dumbledore (very middling, not enough beasts), Downton Abbey: A New Era (great for fans of the show) and a re-release of Encanto, which grows on me every time I see it. On top of that were seven films that were new to me, and four rewatches, including a couple of James Bond from the new collection on Amazon. 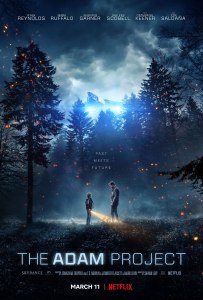 The Adam Project
It’s a Ryan Reynolds film. That kind of covers not only the who, but the what, and to a certain extent the review as well. If you like Ryan Reynolds, you’ll probably like this film, if you don’t you won’t because it’s 75% just him doing his thing. Personally I enjoy that, he’s funny, charming and his characters have a depth and humanity to them even when they’re pretending not to. The story itself, like most time travel stories, possibly doesn’t make sense if you think about it too much; so you just shouldn’t think about it too much. Just enjoy the ride. 8 / 10 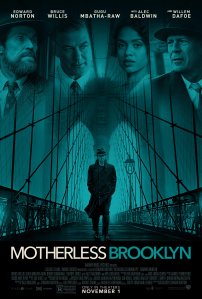 Motherless Brooklyn
A really good noir mystery film. The nuts and bolts are all there, a just-about-followable political conspiracy with a dash of violence and a splash of romance in a beautifully rich 1950s New York. The noir tropes are all there and played straight without falling into parody. The twist in the set up is that the lead character has Tourette’s Syndrome, with physical tics and outbursts of random words and at first that felt gimicky, but it was (I think) well played by Edward Norton and the way the character used and managed his condition, and the way others interacted with him, was really interesting. On top of that performance Norton also wrote and directed the film and it’s quite an achievement. 8 / 10 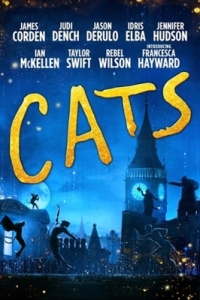 Cats
I wasn’t going to pay good money to see Cats, but when it appeared on Netflix I figured I’d give it a try, it couldn’t possibly be as bad as everyone said. Shockingly, it really was. I honestly don’t know what they were thinking, everything about it is terrible. The visuals were just wrong even if they hadn’t been done poorly. The weird combination of human and cat, CGI fur, ears and tails on top of motion captured actors was just unsettling. The backgrounds were so badly built and rendered they were embarrassing and nothing connected together at all. Even the scale was all over the place. The unknown actors actually were more believable, but as soon as big names are appearing it’s just completely unsettling. The performances are equally all over the place – caricatures and over-egged. Many of them can’t sing (I’m sorry to say it, but Judi Dench was TERRIBLE) and even those that can are struggling through the acting elements. The music is still great, but I don’t remember the stage version struggling so much with a clunky plot.
An absolute shambles that was doomed from the start and should never have been released. 3 / 10

The House
This is an anthology of 3 discrete stop motion animations, each centered on a house. Usually a house in a place of safety, a home; but here the houses are something different, more sinister or trapping. I found the film deeply unsettling, and in fact took a few days break between the first two stories and the third. The animation is beautiful and really interesting, they’re all in the same broad style, but applied to different settings almost a past, present and future (although it’s a run down future rather than a shiny science fiction one). It’s certainly interesting, although my personal tastes at the moment meant that I didn’t enjoy the creepiness. 7 / 10 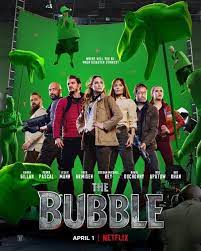 The Bubble
Despite all the horribleness, there’s still a sliver of fun to be had from the pandemic. David Tennant’s and Michael Sheen’s Staged was a hilarious take on life in lockdown for actors. The Bubble throws probably 100x the cash at the same subject and makes something without a single solitary laugh. The concept and actors are all solid, it just somehow managed to fall completely flat. I think they tried to make it too big, they took things too far and it got silly, then stupid, then annoying and eventually just turned into noise. 5 / 10 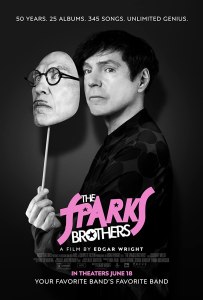 The Sparks Brothers
I had never heard of Sparks – the band led by Ron and Russell Mael. They’ve been around for 5 decades, had 26 albums, 49 singles and even after watching the documentary the only song I’d heard of was “This Town Ain’t Big Enough for Both of Us”. As a subject for a documentary they’re very interesting thanks to their longevity, their influence, their quirkiness and the number of times they’ve reinvented themselves. I did grow to like them, and respect them. The documentary is made by Edgar Wright, a talented director but a massive Sparks fan and that turns it more into a love letter than a good documentary. There are elements of conflict that are skimmed over (the rest of the band seems to be treated as largely disposable) and the editing could be a lot tighter as 2 hours 20 really tries the patience when there’s no real narrative. Also the multiple visual gimmicks are a bit much, more dedication to just one or two would have been better. It’s a nice watch, but I suspect fans of Sparks won’t learn much and the rest of us won’t really care. 7 / 10 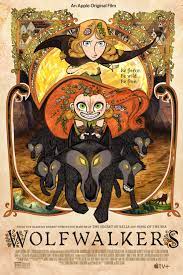 Wolfwalkers
A really lovely animation. The story is original, like Song of the Sea demonstrating the breadth of mythology/fairy tale in even just western Europe beyond Hans Christian Anderson and Grimm. The animation is equally original, and while it didn’t always work for me (I didn’t like the flat backgrounds) I still respected it. The other thing that didn’t quite work for me unfortunately was Sean Bean, he’s very talented and does excellent voice work, but I could never forget that it was Sean Bean. 7 / 10

REWATCHES
Casino Royale
All the elements of a James Bond film were here and fairly well done, but as a whole the film didn’t really work for me. Each element was ok but nothing more than just ok, and they didn’t bond together into a particularly cohesive whole. The villain was very underwhelming and there were at least 2 plot elements too many, leading to a film that’s 1/2 an hour too long but still leaves several aspects incomplete. Daniel Craig is a good Bond, ticks all the boxes, but I’m never entirely convinced by the franchise. 6 / 10

Quantum of Solace
The more Bond films I watch, the more I wish they’d just ditch Bond and do a film all about M. Judi Dench is far and away the most watchable thing in these films, funny and scary, a professionally cold, yet not impersonal character and her interactions with Bond are almost the only thing that make him human. Meanwhile everything else goes on in usual Bond style – I have no idea what the plot was about and the whole thing was just a collection of thinly connected stunts, which to be honest I found pretty dull. 5 / 10

Lilo and Stitch
A thoroughly enjoyable film for kids and adults alike. A very well scripted film that has a solid narrative with depth to the characters, complexity to the issues and plenty of laughs from slapstick and visual humour, wit and sarcasm and impeccably delivered lines and subtle animation. It doesn’t bother covering plot holes, it just kinda ploughs straight through them bringing the audience in on the joke. It’s beautifully animated so the characters (both human and alien) really burst off the screen. Plus for the Elvis songs really felt like part of the film rather than squashed in as an after-thought. Really utterly charming.
Gantu: You are vile, you are flawed, you are foul.
Stitch: Also cute and fluffy!
9 / 10

Encanto
There’s plenty to love about this film. The whole thing is bright and beautiful, vivid characters, a plot that charges along, full of energy and spark and with some lovely sentiment in it. On my first watch in the cinema, it did not work for me. There was just too much in it, too many characters, too much colour, too much backstory, too many sentiments and even too many words in the songs. It was hard to connect with the film and I felt overwhelmed rather than immersed. However, I liked it more when I watched it at home, and then even more when I caught it a second time in the cinema after it won the Oscar. Nothing’s really changed, it’s just that each viewing makes it less overwhelming and I was able to really fall in love with the characters (all of them) and the songs (most of them – I still think the opening song is just too busy and the sappy one is just meh). But, Disney films shouldn’t need multiple viewings though, even complex films like Inside Out worked on the first viewing and then continued to grow more. 8 / 10

Downton Abbey
I once wrote of the TV series “Downton is an autumnal Sunday evening drama. You curl up under a blanket on the sofa with a nice cup of tea and a packet of biscuits and relax. It’s not gritty or challenging, you’re not expected to think or relate it to the reality of life, it’s a last vestige of calm before the crashing arrival of Monday morning.” And that’s pretty much what the film does. Other than a few more expensive and lingering drone shots, very little has been changed to adapt the film to the big screen. This would not have been misplaced as a Christmas special, in fact it could have been even better as two extended episodes for Christmas and New Year to give a bit more time to the crowded number of characters and plots. I’m really pleased that they resisted the urge to go too big with anything, there’s no huge world ending dramas, no stunt casting and nothing particularly life changing. Yes the King and Queen visit, but they’re fairly under-stated for royalty and the focus is still 100% on the lives of the characters we’ve known and loved all along.
I saw it with a packed cinema that absolutely loved it. There was plenty of laughter, some audible ‘aws’, a bit of sniffling, and stifled applause for the cringe inducing Mr Molesley in *that* scene (which when I rewatched on dvd I had to fast forward). It wasn’t much more than a polished up television episode, but it was lovely to see it with a large appreciative audience for once. 8 / 10