Another very quiet month for films. I failed to make it to the cinema to see Thor, but I did make it to see Minions! 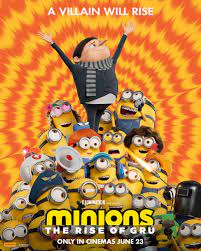 Minions: The Rise of Gru
I was a little apprehensive going in for a number of reasons. 1) Minions wasn’t amazing, the little yellow guys are hilarious and adorable in shorts, but struggled to carry a whole film. 2) Sequels are hard. 3) I really, really needed a fun film, disappointment might be terminal.
I wasn’t disappointed. I loved it. Having mini-Gru grounded the film and gave the minions something to bounce off of and bounce, giggle and babble their way through they did. I adored it, and I have a whole new set of animated gifs to play with. 9 / 10 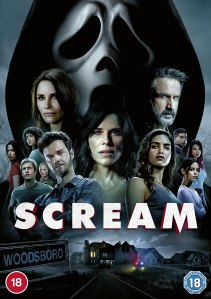 Scream (2022)
25 years after the original Scream (give or take a pandemic delay) and the gang’s all back. This time it’s a self-referential take on the “re-quel”, returning to an old concept, blending old and new casts, and everyone being aware of the rules they all need to follow. It’s a solid idea that keeps the series fresh and moving forward, certainly better than the 3rd film. However it still can’t capture the magic of the original, it occasionally stumbles too far from reality and satire into self parody (I was particularly frustrated by the level of injury people kept fighting with). 6 / 10

Venom: Let There Be Carnage
This was much, much more fun than I had expected. Where the first filmM/a> couldn’t work out whether it wanted to be dark, daft or just CGI action, this one settles firmly that it wants to be an odd couple comedy (with a scattering of CGI action. The relationship between Venom and his reluctant host is just brilliant, and stunningly played by Tom Hardy. The story doesn’t really matter that much, but gets the job done neatly, but everyone involved understands where the real gold is and just lets it shine. 8 / 10

The Sea Beast
This Netflix animation was clearly trying to capture some of the magic of How to Train Your Dragon – it’s got a similar story, similar tone and similar visual style, but it falls a bit flat on the charm. It’s a fun enough film to watch, there’s absolutely nothing that I can really point to and identify as ‘wrong’ but it just doesn’t have that special spark to it and the similarities to How to Train Your Dragon just draw attention to that absence. 7 / 10

Thor: Ragnarok
Finally a Thor film that worked for me. The first two were a bit bogged down for me, all a bit “Shakespeare in the Park”. There were flashes of humour in them, but nowhere near enough to overcome some plodding plots. However Thor post Avengers is a much more interesting character making the most of the considerable comic talents of Chris Hemsworth while letting the dramatic elements be shown rather than said for a change. Loki, Hulk, Banner, Dr Strange and Valkyrie all have substantial supporting roles, each with a similar blend of humour and tragedy, although it’s Korg who steals the show at every available opportunity. While there’s some pretty heavy stuff going on in this film, it is primarily just fun,8 / 10 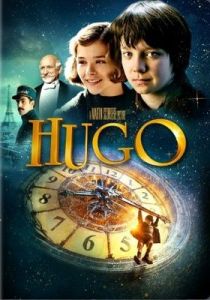 Hugo
I thought this was going to be about the history of cinema, but hardly any mention of that was made until an hour in! It was as if they jammed two films together, one a story about machines and what it means to be someone who fixes them, and the other about the early pioneers of cinema and what happened to them. Both were interesting themes, but I found the muddling of the two ideas together clumsy and a bit of a waste.
I wouldn’t say the film was awful by any stretch, the characters were lovely, the storylines were interesting and the design was beautiful, but I was disappointed that the themes seemed to just meander about a bit. 7 / 10