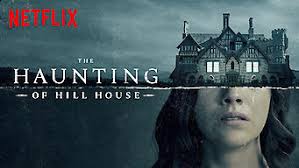 I was looking for something that would be a satisfying, but un-challenging box set for a weekend of dreary weather, mild illness and catastrophically low motivation. The Haunting of Hill House turned out to be a near perfect fit for my needs.

1) Is it supernatural or not? The twists and turns play out very nicely over the 10 episodes, supported by characters holding different positions and in turn evolving their thinking as the audience does. If you see the monster in the first 5 minutes there’s no mystery, just a battle for survival. But if you spend hours not sure whether the monster exists or if people are crazy, that’s far more interesting.

2) Family dynamics are the real horror. As much as this is a story about a haunted house, it’s a story about a haunted family. The series follows a sibling group demonstrating how differently people can respond to trauma, and how those differences can tear a people apart and bond them together. The individual characters are all complex individuals and played by actors more than capable of demonstrating their depth; while the connections and conflicts between the siblings are equally complex and fascinating.

3) Stuff that’s festered is more scary. I’m not just talking about some of the ickiness, but also by tracking two major timelines, and flashing back occasionally to key points in the intervening period, it allows you to see the huge, life changing impacts that events have. Being scared and getting over it is one thing, but when it’s shaped the characters lives for decades, that’s really scary. The plot and interweaving of the timelines was carefully done and I rarely felt frustrated to be pulled from one to the other.

Overall, The Haunting of Hill House is a very satisfying and solid horror series. It’s not without flaws, I struggled early on to track who was who, particularly tracking the children to their grown up counterparts, and there were a fair number of classic horror story problems whereby people often did dumb things that pushed the bounds of credibility. But that’s almost part of the genre itself. The series uses its running time well and leaves just the right amounts of closure and unanswered questions. A great binge watch for a dreary weekend.