I treated myself to a new kindle last month as my poor old generation 4 decided it no longer wanted to talk to the world, which I can fully understand, but did make it a little frustrating to get new stuff on to. The new generation 10 came with 3 free months of kindle unlimited so I’m rummaging through that. It’s a bit like the library, there’s usually something worth reading there, but if you’re after something specific you’re unlikely to find it. I doubt I’ll extend it after the 3 months are up given I’d rather spend £7.99 a month on one book I actually want than unlimited books that I’m a bit ambivalent about. But for now, it’s meaning I’m charging through books!

Meg Elison – The Road to Nowhere Series
1: The Book of the Unnamed Midwife – I didn’t think I liked this book much, but I also found it quite hard to put down and read it in just two days. The story is in some ways a fairly standard post apocalyptic one, told with an eye to practical realities that make it feel very believable. By focusing on what it means when far fewer women than men survive, it provides a satisfying (if scary and depressing) spin on the classic. The story makes central character is incredibly pragmatic, but she’s also human and still reacts and feels, changing as necessary to survive in the new world that is emerging.
After a bit of reflection I think that my problems with the book stemmed from two literary constructs that irritated me. The first is the “unnamed” bit – the character gives herself a new name each time she encounters another group which makes sense, but there are a few jarring times where it makes no sense that she doesn’t use her name. The second problem was that it’s mostly written as a diary (and in my kindle version those sections had an incredibly annoying font), but drops in significant sections of 3rd person, and occasionally drifts away from the central character altogether to tell bits of the story that she couldn’t possibly know which felt like cheating. Both these problems really frustrated me, impacting the otherwise incredibly strong first person narrative.

2: The Book of Etta – The second book in this series continues all the incredibly powerful strengths of the first book, and eradicates the gimmicks that frustrated me. The world has stepped forward a hundred years or so, fast-forwarding so that we can see how societies re-form and people live without the constant memories of how it used to be. We get to see a few different places that live very differently which could run the risk of feeling a little like short stories, but they are bonded together by the central character, similar themes and an ongoing storyline that gradually builds giving the book pace and direction. Etta is a fascinating and rich character, a really interesting person to spend time with and to narrate events, a person who is completely recognisable today, but also a product of a very different world. The first book had some great ideas, but the second book builds those ideas and also delivers a much better reading experience.

3: The Book of Flora – The conclusion of the trilogy continues to develop the key themes around gender in a really interesting way, but unfortunately the writing of the narrative lets the book down a bit (just as in the first book of the series). The book is almost exclusively told by a single character which gives a satisfying focus in that regard, but there are two distinct timelines and several narrative styles. The primary story is about Flora’s journey after the end of book 2, and is told in a mixture of direct 1st person narrative and diary entries made at the time; these are then interspersed with a much older Flora reflecting back on that time, while also telling the story of the ‘current’ events. The first problem was that I got very muddled, it was hard to keep track of whether it was an older Flora reviewing the past, or a younger Flora reacting at the time. When one of the key themes of the book is about people changing and accepting and celebrating themselves and others, it was easy to get lost on the different journeys. Secondly it meant there was a lot of frustrating hinting at what was to come (“If only I’d known then what I know now…”) that just felt over-egged.
Overall I think this is a really interesting trilogy, the ‘universe’ that’s been created is brutally believable and forms a strong foundation to explore themes and subjects that are incredibly relevant today. It can feel a little episodic at time in terms of the stories, but the characters’ journeys pull things together. I think the writing itself lets the ideas down occasionally, but even though I was at times frustrated, I found it hard to put any of the books down and charged through each in just a couple of days each. Flawed, but fascinating.

Robert Louis Stevenson – Treasure Island
A ‘classic’ that I actually enjoyed reading! It’s a proper adventure story that I think probably appeals to children and adults today just as much as it did when it was written over 130 years ago. It’s a confident book that doesn’t bother to explain some of the stuff that’s going on, pirates use vocabulary and language that I don’t think would have made much sense to a general reader in 1885 than it does today, but it sort of doesn’t matter. I just found myself reading those sections at a pace and picking up general ideas rather than the specifics of the sailing, or the pirates plans and I don’t think I missed out on a huge amount. As the whole thing is told from the point of view of the young Jim Hawkins, it doesn’t really matter if things make a huge amount of sense, because it *feels* right. This is a true adventure story and it’s fun to read, what more do you want? 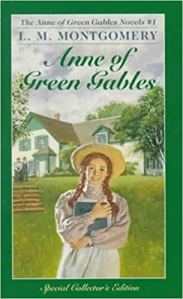 Lucy Maud Montgomery – Anne of Green Gables
One of those classics that I’ve never read, which is odd because I read loads of this type of book as a child thanks to being given my Mum’s childhood books like Little Women and What Katy Did. Still somehow Anne of Green Gables must have passed my mother by, which is a real shame because I think I would have loved it as a child. Anne is a great central character, full of spirit and energy, always getting up to mischief, but never through any real failings, just through clumsiness and childhood ignorance. The adventures she has would have appealed to young me as well – the all consuming friendships, the anxieties of school and the occasional unfairness of the real world. Unfortunately I’m reading this as a cynical grown up and I wasn’t quite as charmed. I found the triviality of her ‘adventures’ quite dull, particularly when I could see hints of bigger stories going on just out of sight with the grown ups. A plot does sort of appear in the last few chapters, but not much of one. I also think even younger me would have found Anne’s flights of imagination and whimsy somewhat insufferable.

H.G. Wells – The War of the Worlds
Most classics of literature, even those as ‘recent’ as the first half of the 20th century, are dreary and hard to read. Meandering about, waffling on and telling even interesting stories in a way that puts me to sleep. But classic science fiction somehow is the opposite, the stories are tight and focused, and the characters come alive through their actions within the story. The War of the Worlds was written in 1898 and is still a really good read. The story of aliens invading is now a classic, but even this early entry into the genre was written with a practical eye that made it completely believable (once you accept the concept of Martians). Telling the story exclusively from the eyes of a single character makes the extraordinary story very personal, and Well’s expertly crafts the narrative so we can understand what is happening globally without losing the focus of the 1st person narrative. Still an absolute masterpiece.

2 thoughts on “Books in August”