I hit my page count target, although to be honest that was only because the last Sunday of the month was a beautiful sunny day and I spent almost the whole day sitting in my garden reading, looking at the daffodils, eating a packet of biscuits and drinking tea. All while wearing multiple jumpers and a warm hat because it may have been sunny bit it was still February. I also had to break out the Terry Pratchett’s because after a run of underwhelming fiction, I just needed the reliability and escapism of the Discworld Guards.

Tim Harford – The Next Fifty Things that Made the Modern Economy
Another interesting and entertaining education from Tim Harford on some things that have fundamentally contributed to the way the world works today. They’re not necessarily things you would think of as important, or that you’ve ever heard of, but they’ve either driven important transformations, or they keep the world (and its money) moving. The structure makes the book very readable, each item is only a few pages and entirely standalone. Unfortunately that does mean that some of the entries are a little confusing, or leave you wanting more.

Amanda Craig – The Golden Rule
I did enjoy reading the book as a light thriller, but I think there were opportunities missed to have more meaningful discussion of some of the central issues. The main character, Hannah, is in an awful situation, a spiral that she can see no way out of. But the book doesn’t probe too deeply on the responsibilities of how she got there. Her ex-husband is no doubt an awful person, but it’s quickly shown in flashbacks that he’s pretty much always been awful and she kept choosing him over the advice of her friends and family. The end of the book also suggests some interesting contributing factors, but despite the book dragging out the ending an unnecessary 50 pages, it doesn’t explore this angle. Throughout, I found characters making sweeping statements about “men are x”, “women are y” and it never felt like it got a richer conversation about “men and women are people, and people are x and y”. Is it good writing about irritating but realistic characters, or is it mediocre writing creating limited characters? I’m not sure.

Dean Burnett – The Idiot Brain
This title really jumped out to me, and hilariously my brother and I both got it for the other for Christmas, and I wasn’t disappointed in either my giving or receiving of the gift. It’s more focused on neuroscience and biology of the brain than it is about the psychology of how we think, but the overlap of the two are fascinating – is it biology driving behaviour or the other way around? It’s a good read, well written in manageable chunks, with a very readable style, and plenty of clever metaphors and clear descriptions. However there were lots of bits that made me glaze over a bit, as soon as the descriptions of the anatomy and names of things started being listed, I just couldn’t keep them in my head. But there are still plenty of things that have stuck and I feel like I better understand things even if I can’t remember the specific name of the bit of the brain responsible for that. 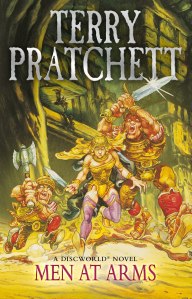 Terry Pratchett – Discworld 15: Men at Arms
The Watch were always my favourite of the discworld ‘series’, and while I’ve re-read Guards! Guards! a couple of times (and listened to the excellent BBC Radio play many times) I’ve not gone further into the series for probably 20 years. Men at Arms is where the Watch really starts to grow and Pratchett’s writing and eye for observation and satire has really come into its own. There are dozens of absolute standout lines and paragraphs that other authors can only dream of writing a couple of times in their careers. If anything the satire and spoof elements have only got stronger since this book was written in 1993, TV and films really haven’t moved on that much from these tropes. The plot is clever, the characters vibrant and the writing second to none.

Terry Pratchett – Discworld 19: Feet of Clay
Another excellent Guards book. The characters and the city of Ankh Morpork are all settling into their familiar forms, the satire is firing on all cylinders and the one liners are laugh out loud funny. There’s a heart at the centre of Pratchett’s discworld novels that’s on fine display here, behind the dead pan humour, there’s actually a joy and that’s on fine display here, when Vimes gets angry about something, or when Carrot starts saying ‘stupid’ things they get to some fundamental truths that just make me want to applaud.