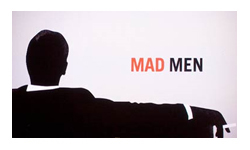 The scheduling of season 7 of Mad Men really hasn’t done it any favours. Offering up just 7 episodes and then leaving a one year gap before another 7 episodes. It felt like pure mercenary cruelty to drag the whole thing out, not least to give it two shots at awards. I really didn’t think too highly of the first half of season:

I’m beginning to think the whole thing is actually a giant treatise on the willingness of the masses to be manipulated through marketing. Frankly, that’s the most charitable excuse I can supply for Matthew Weiner and his team continuing to desecrate the quality and elegance of the early seasons for the tedious navel gazing that we have been offered in recent years.

Still, I’d made it that far and I wasn’t going to give up at the final straight, so I approached the final seven episodes with low expectations and a pissy attitude. I cannot say I was turned around on the whole thing, but from extremely low hopes there were some sparkles of worthiness. The second half of season 7 is actually a very good summary of Mad Men as a whole, some moments of beauty surrounded by a sea of turgid blandness and occasional deteriorations into utter dross.

So the moments of beauty. Peggy has a series of revelations that are a joy to watch – over vermouth with Roger, over lunch with Joan and over the phone with Stan. Each moment is just perfectly played and understated and prove both character and actress to be the true star of the show. Another high point, and I never thought I’d say this, but possibly the moment of the whole series was Betty’s letter. It actually makes you look back on her journey through the series in an entirely different light.

In comparison… the endless pontificating from the men. They all drove themselves and those around them to distraction with their stupid decisions, utter lack of consideration, and just plain boring issues. Round and round they went making the same mistakes over and over and then wallowing about how miserable they were as they racked up more and more failed relationships and failed business ventures and yet somehow all made more and more money. It just wasn’t interesting to watch. Dull, frustrating and actually painful to watch.

The women of the series were far and away more interesting, richer characters. Peggy’s development, Betty’s journey; Joan’s strength and vulnerability, Sally’s wonderful growth, even the ‘bit part’ secretaries that came and went. The only stumbling point was the phenomenally irritating Megan and maybe she would have been salvageable if she hadn’t been so built around Don. For being the central character, Don was probably the weakest written. He was a fantasy, the dream that the writers thought was cool – a troubled childhood, a dark secret, a creative soul, a magnet for women and the bad boy that gets away with it because he’s brilliant. It’s a cliché, a Marty Stu. It’s boring and lazy.

I accused Matthew Weiner of running a long experiment to see how far he could push people before they shouted ‘the emperor has no clothes’, maybe what he was really doing was pushing that while the emperor was indeed naked, the show was actually about the empress standing quietly behind him. Maybe? But I suspect not. I suspect I’ve just found an interpretation that means the series wasn’t a huge disappointment.